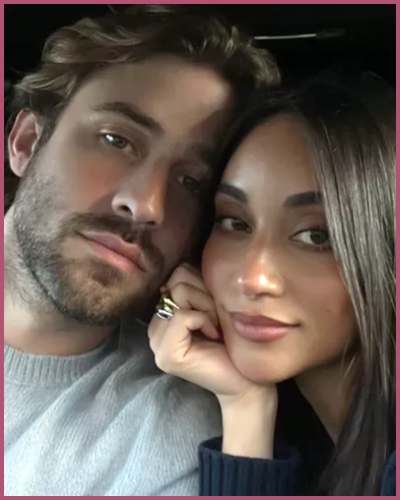 Victoria Fuller and Greg Grippo are now officially girlfriend and boyfriend. The new lovebirds made their romance Instagram official on Thanksgiving Day as they both shared cute posts on their respective Instagram handles.

Fuller posted an Instagram story sharing a selfie with Grippo while sitting in a car and wrote on the side of the photo, “happy thanksgiving”, alongside a red heart emoji.

She shared another candid photo in which Grippo seemed trying to smooch Fuller on the cheek. Meanwhile, Grippo posted a sweet video to his IG feed of the pair holding and kissing each other while watching a moving cloud display in an art exhibition.

He then captioned the post with a red heart emoji while fuller commented on the post saying,

As soon as the former Bachelorette shared the post on his IG handle, his friends, fans, and family took to the comment section to well-wished them.

“Damn y’all got a movie coming out ?”

Mikey Planeta from Thurston’s season quipped over the post,

“Is this the new Wizard of Oz trailer?”

Similarly, Brittany Galvin, Kelsey Weier, and others congratulated them.

Victoria and Greg first confirmed their romance earlier this week during their appearance on the Bachelor in Paradise reunion final. During the reunion portion of the finale, host Jesse Palmer asked Fuller whether she started dating Grippo following her breakup with DePhillipo.

She then simply replied,

“Yes, Greg and I are together,”

Grippo revealed that the two met through their mutual friends before Victoria’s appearance on season 8 of Bachelor in Paradise. The two first sparked dating rumors over the summer while vacationing in Italy together.

The lovebirds even got matching tattoos that read “ciao” while they were on a trip to Italy.