Victoria Justice is an American actress, model, and singer. She is in a relationship.

Victoria Justice has been in a number of relationships in her life. In 2004, she began dating actor Cole Sprouse. They broke up in 2005.

Since October 2016, she is in a relationship with singer-songwriter Reeve Carney. Victoria and Reeve have been together for less than a year and their relationship is going very well. 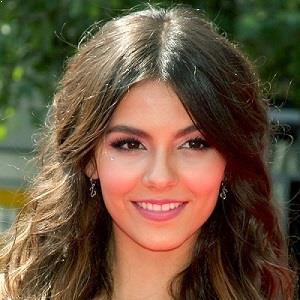 It's nice to just embrace the natural beauty within you

If you love something, you have to stay really focused and can't let outside things distract you.

Who is Victoria Justice?

Victoria Justice is an American actress, model, and singer. She is popular for the portrayal of Lola Martinez on the series Zoey 101 (2005-2008).

She is also popular for playing the character Tori Vega in Victorious (2010-2013). Since 2015, she appears on the series Eye Candy.

As a singer, she has performed several songs on the soundtrack for the Nickelodeon musical Spectacular!  She is currently signed to Red Light Management.

Talking about her early life, Victoria Justice was born on 19 February 1993, Hollywood, Florida, USA. Her birth name is Victoria Dawn Justice. Her parents are Serene Justice-Reed and Zack Justice.

She has a half-sister named Madison Reed. Victoria She spent her childhood in Florida. Her family moved to Hollywood, California, in 2003. She is an American by nationality and belongs to mixed (Irish, English, German, French, and Puerto Rican) ethnicity.

Victoria completed her school education from Cleveland High School. After that, she attended the Millikan Performing Arts Academy in Los Angeles.

Victoria Justice began her career as a child model. During her early career days, she did advertisements for companies such as Ralph Lauren, Gap, and Guess. After that, she did modeling in national commercials for Mervyn’s, Peanut Butter Toast Crunch, and Ovaltine. She began her acting career at the age of 10, with a guest appearance in an episode of the series Gilmore Girls (2003).

Victoria rose to fame with the portrayal of Lola Martinez on the series Zoey 101 from 2005 to 2008. She then won two Young Artist Awards in 2006 and 2007 for her role in the series. After that, she had roles in many series including Silver Bells, Everwood, The Naked Brothers Band, and Spectacular!

From 2010 to 2013, Victoria portrayed the character Tori Vega in Victorious. After that, she had roles in Undateable, Cooper Barrett’s Guide to Surviving Life, and The Rocky Horror Picture Show: Let’s Do the Time Warp Again. Since 2015, she appears as Lindy Sampson in Eye Candy. In 2014, Maxim listed her #86 on their Hot 100 list.

Besides acting, she is a singer and she has performed several songs for the soundtrack to the Nickelodeon musical Spectacular!  She has also recorded few songs for the Victorious series. She has a net worth of $12 million as of 2022.

Rumors are that Victoria is having a feud with American singer Ariana Grande. It was rumored that she bullied Ariana many times. Victoria became a part of a big controversy in 2014 when her nude photos were posted on social sites. She later said that those were her pictures but were hacked by someone.

Currently, there are no rumors regarding her personal life and professional career.

She is also active on youtube and has more than 852k subscribers.