Vikas Khanna who is Indian Michelin Star Chef is one of the best top chefs in the world. He is is single and not in any relationship. 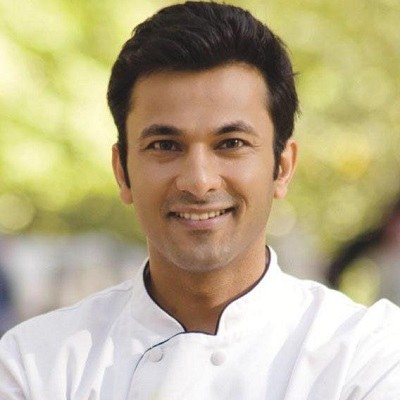 Currently, Vikas Khanna is single and not in any relationship.

But in an interview with Hindustan Times, Vikas said that he is looking forward to having a family.

There were rumors that Khanna has hooked up with Shipra Khanna. Shipra is also a winner of the second season winner of Master Chef India. Later, he Claims the news to be false.

A few years ago there was a rumor Khanna had an affair with the author, actress, and model, Padma Lakshmi. They have similarities as they both were born in India and lived in a foreign land.

But, later Vikas denied that rumor.

Who is Vikas Khanna?

Vikas Khanna who is Indian Michelin Star Chef is one of the best top chefs in the world.

He is an Author, Filmmaker, and hospitality investor.

He is also the judge of the Star Plus series MasterChef India.

Vikas Khanna was born on November 14, 1971, in Amritsar, Punjab, India to Davinder and Bindu Khanna. His birth sign is Scorpio.

He was more inspired by his grandmother. She loves to cook food and her kitchen became a training place for him.

Due to his Misaligned legs, he couldn’t walk properly until 13.

He started making his own recipes at a young age. He opened Lawrence Gardens Banquets for weddings and family functions at 17.

Vikas has a brother Nishant Khanna and a sister Radhika Khanna. Radhika is a Fashion Designer.

Khanna graduated from the Manipal Academy of Higher Education in 1991.

Khanna got a bachelor’s degree in Hotel Management from the Welcomgroup Graduate School of Hotel Administrator.

While Khanna was in India, he worked for different hotels and groups such as Taj Hotels, Oberoi Group, Welcome Group, and Leela Group of Hotels.

When he was in New York, he worked for the Salaam Bombay and The Cafe.

Then he joined Junon on Dec 2, 2010. Junon is an upscale Indian restaurant in Flatiron district of Manhattan.

MasterChef India is an Indian cooking reality show based on MasterChef Australia.

Khanna appeared as a judge of MasterChef India from its Season 2 which is aired on Star Plus and released on October 22, 2011. After that, he appeared every season as a host or judge.

Khanna was a fourth season’s host of the show Twist of Taste aired on Fox Life.

He was in the season 2 finale of Hell’s Kitchen as an Indian-cuisine Specialist. It’s an American competitive reality television series.

The Indian feature film The Last Color is directed by Vikas. This film is about daily struggles to live in the streets of the city of Banaras, India.

South Asian Kid’s Infinite Vision( SAKIV) was founded by Vikas Khanna in 2001. This organization focuses on worldwide issues such as Tsunami, hurricanes, earthquakes, etc. It worked for the children’s education and relief. It does various activities to help others in collaborating with other charitable institutions.

Khanna is the goodwill ambassador of the Smile Foundation. Smile Foundation is a Non-Government Organization in New Delhi, India. This supports the cause of malnutrition in India and organizes a charitable program for Education for poor children and many more.

On 14 May 2012, he cooked food for the former American president Obama at the Rubin Museum of Art in New York City.

He wrote about 36 books in total and here are the top five of them listed below.

The average Executive Chef salary in the US is $69 k.

Writers and authors earned a salary of about $ 61 k US.

Khanna has black hair and brown eyes. His height is 6 feet tall and weighs around 82 kg.