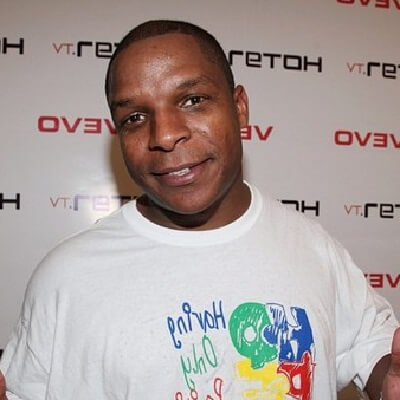 Vin Rock is possibly single. He might have been in relationships before but he has stayed very private regarding his personal life. He has not revealed any of his ex-girlfriends. He has preferred to stay low profile despite being a member of one of the most influential hip hop bands of all time.

Who is Vin Rock?

Vin Rock is an American rapper. He is best known as the member of the Grammy Award-winning hip hop trio, ‘Naughty By Nature’.

He spent his childhood days in East Orange. His ethnicity is African-American.

There is no information about her educational background. He has not revealed which school or college he went to.

Vin Rock is widely known as the second member of Naughty by Nature. The group formed in East Orange, New Jersey in 1986. All of the three members, Treach (Anthony Criss), Vin Rock ( Vincent Brown), and DJ Kay Gee ( Keir Gist) were students of the same high school. The trio started performing at talent shows Queen Latifah discovered them after a few years. Impressed by them, she signed them to her management company and also assisted them to land a deal with Tommy Boy Records.

The trio released their self-titled debut album in 1991. One of its tracks, ‘O.P.P’ was a top ten hit. It made them crossover stars, yet their ghetto sensibility and gritty street funk made them popular in the hip-hop underground genre, too.

In 1993, they repeated their success with their album, ‘19 Naughty III’. The album had another crossover success called ‘hey! ho!’. The album entered the Top Five and went platinum. Their 1995 album, ‘Poverty’s Paradise’ went on to win a Grammy for Best Rap Album.

After several years, in 1999, they returned with a new album titled ‘19 Naughty Nine: Nature’s Fury’. One of the hits of this album was ‘Jamboree’. DJ Kay Gee left the group after the album following conflicts with Treach.

The remaining duo released ‘IIcons’ in 2002. They released their seventh group album, Anthem Inc on December 13, 2011.

How much is Vin Rock worth?

According to some online sources, as of 2020, Vin Rock has an estimated net worth of around $800k. His group, ‘Naughty by Nature’ has sold millions of records worldwide.

Rock stands at a height of 5 feet 9 inches. He weighs around 85 kg. His hair color is black and similarly, his eyes are also black in color. He has not revealed his other body measurements including shoe size, chest size, biceps size, etc.

In May 2013, frontman Treach shocked the group’s fans as he revealed that Vin Rock was “fired” from the group. The reason was apparently for not putting the same amount of effort as him and DJ Kay Gee. He announced it with his Twitter account after which Vin responded by saying “you can’t fire the boss”.

In April 2020, Treach revealed that they have resolved their issues but the relationship was only professional. He said it’s all business from then.

“You got teammates, sometimes, that’s on the same team, they may not feel each other. At the end of the day, you going out to win. That’s what we doing.”

You may also like to read the Bio, Career, Net Worth, Body Measurements, Social Media, and more about Takeoff, Murs(Nicholas Carter)- Rapper, Elzhi(Jason Powres)- Rapper, and more.