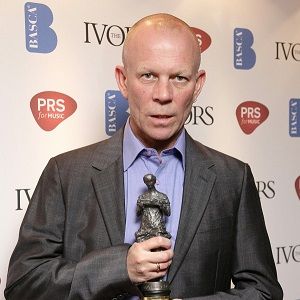 I'm actually doing a show. from my shed. on the internet. but it won't be music or anything, it's more to do with drinking and smoking. it's an art piece.

Vince Clarke is a married man. He tied the knot on 17 May 2004 with Tracy Hurley after dating her for several years. The couple has a beautiful son, Oscar.

Tracy used to be a co-founder of a museum named Anatomy Museum.

This couple along with their child are living in Brooklyn, US.

Who is Vince Clarke?

Vince Clarke is a veteran British songwriter and synth-pop musician. Vince is the composer of the band Erasure from 1985. Normally, Vince plays instruments like keyboards, guitar, violin, piano, melodica.

Furthermore, he has also worked with several bands such as Depeche Mode, Yazoo, and The Assembly. With Yazoo, Vince has produced some of the chartbuster hits which include Don’t Go, Only You, The Other Side of Love, Situation and much more.

He was born on 3 July 1960, in South Woodford, London, United Kingdom. His ethnicity is English.

Later he grew up in Basildon, Essex with his family. Details about his father, mother, and siblings are not available.

Furthermore, there is no information regarding his educational background.

Vince Clarke began his professional music career with the band name Depeche Mode in 1980. He was the vocalist of the band until Dave Gahan signed for the band. However, just after a year Vince left the band and united with Yazoo.

After his departure, Depeche Mode became a huge success. In 1981, Vince joined Yazoo alongside Alison Jane Moyet. The duo got huge recognition with two albums that produced hit songs including Don’t Go, Situation, The Other Side of Love, and much more. However, the duo couldn’t carry the band so long and Alison left the band and started her solo career.

Later, Vince teamed up with Eric Radcliffe who was also the producer of Yazoo, and introduced a new band named The Assembly. With it, Vince used various singers in different songs. Their first single was Never Never, which was a mega-hit at that time. Furthermore, they launched a new single named ‘One Day‘ with Paul Quinn in 1985.

In the same year, Vince and Andy Bell formed a new band ‘Erasure‘ which also acclaimed huge success in British music. They released some of the popular numbers such as Oh L’amour, Sometimes, Chains of Love, A Little Respect, Drama!, Blue Savannah, and much more. In addition, Erasure became the most prominent and commercially successful electronic band in music history.

Apart from this, Vince has also featured in other bands such as Family Fantastic and The Clarke And Ware Experiment. Moreover, Vince has also formed a new company named The Illustrious Company with Martin Ware. Vince has also appeared in the BBC Four documentary Synth Britannia. Furthermore, he has also joined up with the band The Good Natured on a song called Ghost Train.

This songwriter’s net worth is estimated at around $10 million. Similarly, a musician’s average yearly salary is around $42k.

So far, Vince has achieved huge success and has received many awards and honors. He has gained NME Award for Best Electronics. Furthermore, he was also awarded the Outstanding Song Collection on 21 May 2009.

Currently, there are no rumors regarding his personal and professional life. It seems he has more focused on his profession rather. So far, there is not any controversy.

Vince Clarke has a height of 5 feet 6 inches and his weight is average which is 93.8 kg Furthermore, he is bald and his eye color is green.

Vince is not so active on social media sites. He does not hold any private account or any social account.