Singer-songwriter Vince Gill is married and a father of one.

He got married to Janis Oliver on 12 April 1980, who is a country music singer and an actress. They first met in Los Angeles when they were both starting out in music.

They have one daughter together named Jennifer Jerene Gill. After eighteen years of marriage, the pair got separated on 30 June 1998.

Again, he married for the second time on 10 March 2000 to Amy Lee Grant who is an American singer-songwriter, musician, author, media personality, and actress.

They met in 1993 for the first time and since then they formed a good friendship. They both had a problem in their married life.

Grant got divorced from her first husband in 1999. A few months after her divorce she was spotted with Vince in many public places and one year after it they got married to each other. They have a daughter together named Corrina Grant Gill. 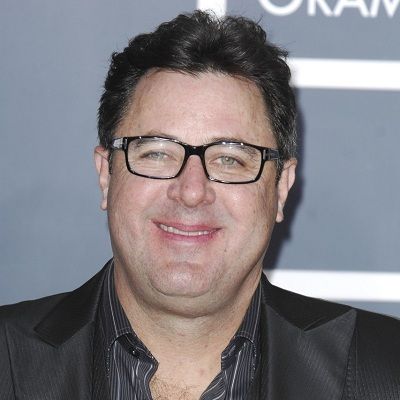 Success is always temporary. When all is said and one, the only thing you'll have left is your character

I am responsible for me. I can kind of take care of what I need to do and should do what I like to do

I've always been more drawn to being normal than being famous.

Who is Vince Gill?

Vince Gill is an American country multi-instrumentalist, songwriter, and singer.

He has gained commercial success and fame both as in the 1970s frontman to the country-rock band Pure Prairie League and as a solo artist beginning in 1983.

Vince is 65 years old. He was born on April 12, 1957, in Norman, Oklahoma, the U.S. His father’s name is J. Stanley Gill who was a lawyer and administrative law judge.

His mother’s name is Jerene Gill who is Homemaker. Vince’s mother had a son, Bob Coen, from a previous marriage. He has a half-brother named Gill but was considered a full brother by Gill.

Vince belongs to American nationality. There is no information about his ethnicity.

He moved to Louisville, Kentucky, to join the band Bluegrass Alliance after graduating from high school in 1975,

In 1979, he debuted on the national scene with the country-rock band Pure Prairie League. Vince appeared on that band’s album Can’t Hold Back.

Gill is the lead singer “Let Me Love You Tonight” on their song. Gill, Albert Lee, Australian tour promoters Ann and Andrew Pattison just prior to signing with MCA Records, with whom he would receive major recognition in 1988 in Australia.

In 1981, he left Pure Prairie League to join Cherry Bombs, the stage band that backed Rodney Crowell. He worked with Tony Brown and Emory Gordy Jr., both of whom would later produce many of his albums.

However, his albums achieved only moderate sales. Gill sign with MCA records to left RCA in 1989.

Similarly, his successful albums, Pocket Full of Gold (1991) and I Still Believe in You, of which the title track went to U.S. Country No. 1.

Gill continued to release highly successful albums, capitalizing on the virtuoso quality of his electric and his pure and soulful tenor voice, and the excellent quality of his songwriting throughout the 1990s and into the 2000s. In 2007, he played at the Crossroads Guitar Festival.

He performed at the Southern Kentucky Performing Arts Center in Bowling Green, Kentucky, for its opening night in March 2012.

On November 5, 2014, at the 48th annual CMA Awards Gill achieved the Irving Waugh award for excellence in country music. Gill was selected as one of 30 artists to perform on Forever Country, which celebrates 50 years of the CMA Awards in 2016.

Vince has sold more than 26 million albums and accumulated more than 50 Top 40 hits. He sang the lead vocals once were sung by Glenn Frey when he joined the Eagles on tour in 2017.

On the 2019 album: State I’m In, he plays electric guitar as a guest musician on Aaron Lewis’ song “Love Me”.

Gill has won 21 Awards from 44 Nominations. Vince has been honored with 18 CMA Awards, by the Country Music Association, including two Entertainer of the Year awards and five Male Vocalist Awards.

Gill has also earned 21 Grammy Awards, more than any other male country music artist as of 2017.

Gill has an estimated net worth of $30 million. Currently, we don’t have any information about his income and salary.

Though, Gill is a Brilliant and amazing singer this singer has always stayed far from rumors and controversies.

Gill is 6 feet 2 inches tall and weighs 93 kg. He has brown hair color and his large green eyes are bright and beautiful.

There is no more information about his body measurements.