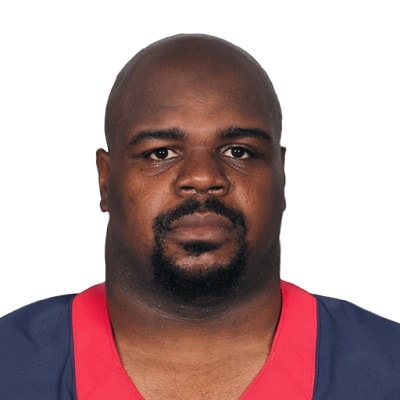 A lot of people look at me as a big person. Some people consider me to be obese. Some people consider me fat and sloppy. Everybody knows that I have a big stomach, but I think sometimes that overshadows everything else on my body - from my calves to my back to my shoulders to my biceps. What people go to the gym and work for, I have. The only thing I don't have that they got is six - packs. But I really don't care about six-packs.

The one thing about me is, I don't care what people think. It all starts with yourself. I believe in myself. I love myself. So it's kind of like, they can shove it up their you - know - whats.

I love to have fun. I do my own shopping. I do my own yardwork. I like to garden. I like to fish. I like to golf. I'm an outdoorsman. I like to cook. But when I hit the football stadium, I click the switch, because I know I'm there for a job. I get in a whole different mindset when I enter the stadium. But once I leave I'm back to being a father, husband, a friend.

Vince Wilfork is a married person. He has been married to his longtime girlfriend Bianca Farinas on 3 March 2004. They met for the first time online while he was a college student in 2001.

The couple welcomed a son named David Dream Angel Wilfork (born 5 August 2009) and daughter Destiny Barbara Wilfork on February 14, 2003. Also, he has a stepson, D’Aundre Wilfork (born 1997), from the previous relationship of his wife.

Who is Vince Wilfork?

Vince Wilfork is a former American football nose tackle and had played for National Football League (NFL) for 13 seasons. He had played for New England Patriots and Houston Texans. Also, he is a two-time Super Bowl champion.

He was born on November 4, 1981, in Boynton Beach, Florida, USA. His birth name is Vincent Lamar Wilfork. He was born to parents David Wilfork and Barbara Wilfork. He has a brother David Wilfork, Jr. His father passed away in June 2002 due to complications of diabetes whereas his mother died due to stroke in December 2002.

Vince holds American citizenship but his ethnicity is unknown.

He joined Santaluces Community High School where he was a letter winner in football, wrestling, and track and field. After graduation, he attended the University of Miami.

He played the Miami Hurricanes football team during his college. In 2004, he entered the 2004 NFL Draft in which he was ranked as the No. 2 defensive tackle and drafted by New England Patriots with the 21st overall pick.

He finished the season with 48 tackles in the 2007 season and was selected to the 2009 Pro Bowl. Also, he was named as a second-team All-Pro selection.

On March 16, 2015, Wilfork signed a two-year contract with Houston Texans on March 16, 2015. He totaled 43 tackles in his two seasons in Houston. Finally, he held a press conference to announce his retirement on August 9, 2017, and also signed a one-day contract to retire with the Patriots.

He has an estimated net worth of around $60 million and he has earned that sum of money from his professional career. Also, he earns around $19 million per year.

Vince Wilfork has a height of 6 ft. 2 inches and weighs 147 kg. He has dark brown eyes and black hair. His shoe size, dress size, etc. are unknown.

Who is Nicole Walters? Know about her age, education, family, married life with Josh Walters and adopted daughters