Vincent Martella is an American actor, voice actor, and singer. He is best known for his role as Greg Wuliger on the UPN/CW sitcom Everybody Hates Chris. 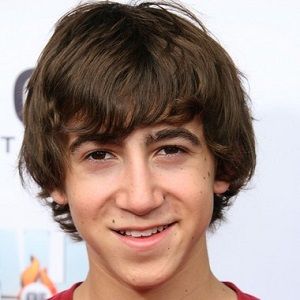 What is the relationship of Vincent Martella?

Currently, he is living a single life so happy as he is focused on his career development.

There is no information about his dating history and his girlfriend.

Who is Vincent Martella?

Besides, he is also popular for lending his voice in the Disney XD original animated show Phineas and Ferb for Phineas Flynn character.

Martella was born to his parents Donna (mother) and Michael Martella on 15th October 1992 in Rochester, New York. His father runs Captain Tony’s, a chain of pizzerias.

He holds Italian ethnicity and belongs to American nationality. He migrated to Florida during his childhood and spent most of his time there.

In discussing his educational background, he attended DeLand High School and got graduated from there in 2011. Currently, he has been studying at the University of Florida for an online degree in business.

On talking about his career, Martella acted in the film entitled Role Models starring Paul Rudd and Seann William Scott. He then appeared in the film Bait Shop with the lead role along with Billy Ray Cyrus and Bill Engvall.

Not only this, but he also appeared in the show Everybody Hates Chris as Greg and in the show Ned’s Declassified School Survival Guide as Scoop.

Moreover, playing the piano and singing, he released his first album entitled Time Flies By. Furthermore, Martella entered in the voice acting world providing the voice in the Disney XD animated series Phineas and Ferb for Phineas.

Another, he also lent the English voice in the 2010 video games Final Fantasy XIII and Final Fantasy XIII-2 for Hope Estheim, the main character. In addition, he lent the voice for the animated film Batman: Under The Red Hood for the teenage Jason Todd / Robin. There his younger brother, Alexander also had lent his voice for the child version of Todd.

Additionally, Martella performed as Patrick in the fourth season of The Walking Dead television series.

In talking about his salary and the net worth, he has a decent amount of salary but has not yet revealed it to the media.

His net worth is estimated to be $3 Million as of 2022, which he earns from his successful profession.

Besides, he also was nominated for Teen Choice Awards in Teen’s Choice TV Sidekick for  Everybody Hates Chris.

On talking about his body measurement, Vincent Martella is 5 feet 5 inches tall. His bodyweight is currently unknown.

Vincent Martella has not been into any controversies yet. And he has been maintaining his personal life and professional life with great care.

Thus, there are currently no such records regarding his rumors of affairs and personal life or a controversy.