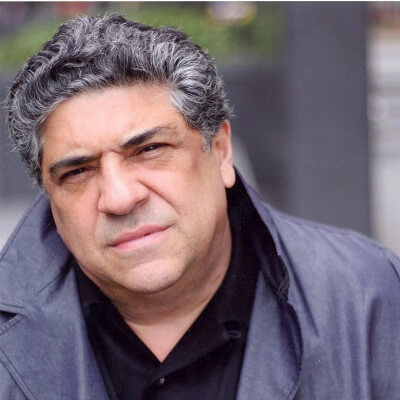 He has previously been married to Nancy Berke. From their relationship, he has a daughter named Renee.

The couple remained close friends even after their divorce. Pastore became close to her husband after him and even donated the winnings from The Apprentice to a charity in his name.

Also, he was previously engaged to Lisa Regina. However, they went through a rough break up. She accused him of hitting her during a dispute and filed a $5.5 million civil lawsuit against him for assaulting her.

Moreover, she claimed that he hit her in the back of the head, grabber her hair, and even forced her head down in the car’s gear shift. However, he denied all this.

Who is Vincent Pastore?

Vincent Pastore is a well-known Italian-American actor and reality TV personality. Pastore is famous for playing the role of mobsters and is famous for his work in ‘The Sopranos’, ‘Revolver’, ‘Shark Tale’, etc.

Vincent Pastore was born in Bronx, New York, on July 14, 1946. As of 2020, his age is 73. His father’s name was John Pastore. He was a factory worker. He has not revealed the identity of his mother. Similarly, there is no information about his mother and other family members. He spent his childhood days in  New Rochelle, New York.

His ethnicity is Italian-American.

Talking about his education, he joined the United States of Navy after graduating from high school. Following that, he attended Pace University for three years. He graduated with a degree in Drama.

Vincent Pastore has an estimated net worth of around $6 million. Prior to being an actor, he was a club owner in New Rochelle, New York. His main source of income today is acting in movies, TV shows, and also featuring in reality TV shows. There is no information about his salary. An average actor in America earns around $40k a year.

Vincent Pastore was a club owner in New Rochelle, New York. He was in the club business from 1967 to 1987. During his time at the club, he met Matt Dillon and Kevin Dillon. They convinced him to become an actor.

He started his acting career with small roles in several 90s movies. One of his first acting roles was a criminal on America’s Most Wanted: America Fights Back. In the 90s, he had small roles in Goodfellas and Carlito’s Way.

He is known for portraying Italian-American mobsters on movies and TV. In 1995, he starred in The Jerky Boys and a year later, he starred in the movie, Gotti. In 1999, he got his most well-known role.

He portrayed Salvatore “Big Pussy” Bonpensiero on ‘The Sopranos’. In the finale of season 2, his character got murdered. However, he still made appearances after that.

Following that, he appeared in the films, Riding in Cars with Boys, Mickey Blue Eyes, and Shark Tale. Moreover, he made appearances in ‘Law & Order’, Vegas, One Life to Live, and Everybody Hates Chris. In 2008, he appeared in General Hospital as a mobster.

In 2006, he participated in VH1’s reality show, Celebrity Fit Club and in 2007, he was cast for ABC’s Dancing With the Stars but withdrew before the show started. A year later, in 2008, he was one of the contestants on Donald Trump‘s Celebrity Apprentice.

On January 21, 2020, he appeared on ‘Gordon Ramsay‘s 24 Hours to Hell and Back’. Previously, he hosted The Wiseguy Show on Sirius Satellite Radio. In 2019, he launched his tomato sauce business, Vincent Pastore’s Italian Sauce.

Pastore stands at a height of around 5 feet 10 inches. He weighs around 136 kg. He appeared on the fourth season of the reality show, Celebrity Fit Club. During his time there, he lost 29 lbs.

His hair color is black and he has a pair of brown eyes.

Pastore has been a controversial figure. His former fiance, Lisa Regina accused him of hitting her during a dispute in 2005. She even filed a $5.5 million civil lawsuit against him for assaulting her.

He pleaded guilty to attempted assault and was sentenced to 70 hours of community service. Regina claimed that he hit her in the back of the head, grabber her hair, and even forced her head down in the car’s gear shift. However, he denied all this. Moreover, she claimed that she suffered psychologically from the incident.

In 2017, he had trouble with film director, Danny Provenzano. He sued Pastore for not showing up for a three-day shoot in 2013. The duo had planned to have Vincent star in a TV pilot, ‘Manhattan, Kansas’ but did not show up according to Provenzano.

His lawyer said that he did not show up because it was a nonunion shoot. Provenzano claimed that he was a rat for not showing up and because fo him, 60 people were affected.

You may also like to read the Bio, Age, Career, Net Worth, Relationships, Body Measurements, and more about Matt Dillon, Donald Trump, Gordon Ramsay, and more.