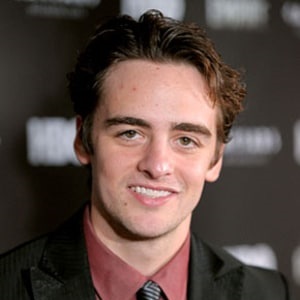 I find historical figures in general very tricky because you feel at times that you're serving two masters. Not only the arc and wonderful writing that comes with the show, but also the history of a person's life

As an actor, I like as much time with the material as possible and given the opportunity, time spent with the other actors in the scene. But that is a rare luxury in working in any TV series

I've picked up a great appetite for pastrami on rye and a nice cream soda. It is fantastic. So I have to be careful or I'm going to just get really fat.

Vincent Piazza is currently in a relationship. He is engaged with an actress named Genesis Rodriguez.

The only relationship he has been with singer Ashlee Simpson. They dated for a brief period of time from June 2011 to November 2012.

As per the reports, because of their busy schedules, this couple decided to broke up.

Who is Vincent Piazza?

Vincent Piazza is an American film, television plus a stage actor. He is known for playing the role of Lucky Luciano in the Boardwalk Empire.

He was born on May 25, 1976, in Middle Village, Queens, New York, the U.S. His ethnicity is Italian-German as his father was Italian and his mother was a German.

He has a younger brother and one older sister. Moreover, he developed a keen interest and enthusiasm for acting.

Talking about his education, he attended Archbishop Molloy High School in Queens receiving a scholarship.

Vincent Piazza started his career as an ice hockey player in his college days. Unfortunately, he met with an injury that took away his career as a player. So he began acting career through Broadway’s acts like Baby Steps, A Match Made in Manhattan and Much Ado About Nothing.

His first film was Stephanie Daley in 2006. He appeared in series The Sopranos and landed a role as Earl Hefner in Rocket Science in 2007. In 2008, he was seen in the film as Ricky Delacruz in the movie Assassination of a High School President.

Additionally, he was a regular cast member as Lucky Luciano of the series Boardwalk Empire in 2009. In 2014, he earned the role of Tommy DeVito in a musical drama movie Jersey Boys.

This actor’s net worth is estimated at around $1 million. His 2014’s movie Jersey Boys has earned around $67.7 million at the box office.

A rumor about Vincent appearing in the Marvel movie Daredevil was spread in 2015.

Vincent Piazza has a height of 5 feet 11 inches and weighs 73 kg.

His hair is dark brown and eyes are in hazel green color.