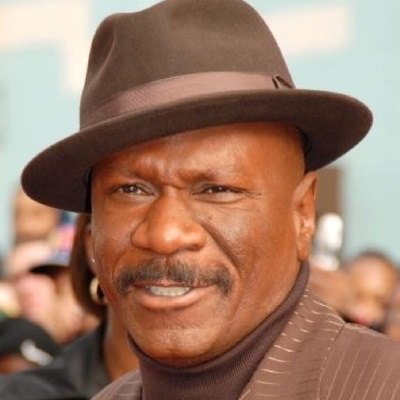 I bought a new house ... It's just a little, you know, I hate to say it, but even looking at the sort of money that they spend on films now, and looking at the problems that we have in the world, it's a little ridiculous ... I just think that the industry is out of hand and something's gonna give eventually.

"I'm not gay. I'm not homophobic. And I've never been raped. So it was acting. I look at it as the most powerful man in the movie being in one of the most vulnerable positions. And what that did was cause the audience to feel for him. It shows that no matter how hard-core you think you are, this could happen to you." - On his role as Marsellus Wallace in Pulp Fiction.

Quite honestly I never had a desire to be an actor. I tell people, I did not choose acting

acting chose me. I never grew up wanting to be an actor. I wanted to play football. In about 9th grade an English teacher told me I had a talent to act. He said I should audition for a performing arts high school so I did on a whim. I got accepted. Then I got accepted at the Julliard School and by then I was serious about it. I think God has blessed each of us with at least one gift. So I think it's a matter of do we find it within our lifetime. I think that's what God blessed me with. I think I am doing what God put me on this planet to do.

Ving Rhames is married to Deborah Reed. His wife, Deborah is also an actress by profession. The couple married on 25th December 2000.

Together, the couple is blessed with three children, including two daughters, Reign Beau Rhames (b. 2000), and Tiffany Reed, and a son, Freedom Rhames (b. 2002.).

Previously, he was married to Valerie Scott. They married on 4th July 1994. After 5 years of marriage, they got divorced on the 9th of February 1999.

Who is Ving Rhames?

American Ving Rhames is a Golden Globe award-winning actor and producer. He is renowned as the Luther Stickell of Mission Impossible Rogue Nation and Marcus of the Bringing Out the Dead.

Last, in 2018, he appeared in the movie, Cagney, and Lacer as Captain Stark.

Ving Rhames was born on the 12th of May 1959, in Harlem, New York City in a middle-class family. His birth name is Irving Rameses Rhames. He was named after the journalist, Irving R. Levine. He is of Germanic ethnicity.

His father, Ernest Rhames used to an auto mechanic by profession whereas his mother Reather was a homemaker. They were originally from North Carolina where they grew as sharecroppers. He has a brother, Junior Rhames.

Moving toward his education, he completed High School education at, High School of Performing Arts in New York. Later, in 1983, he completed his bachelor’s degree with Honors in Fine Arts from Juilliard School. In between, he also attended the SUNY Purchase to study drama.

After graduating from college, Ving Rhames started his career on Broadway with the play, The Boys of Winter. The same year, he made his movie debut with the film, Go Tell It on the Mountain. In the movie, he is portraying the character of Young Gabriel.

Following that, he made his appearance in a few series like Another World, Miami Nice, Tour of Duty, and Spenser: For Hire in some character roles.

Along with that, he appeared in movies like The People Under the Stairs, Dave, and Bound by Horror. However, his work as an actor got recognized through crime-drama, Pulp Fiction. In the movie, he portrayed the supporting character of Marsellus Wallace. Through the character, he gave one of his best performances.

After the movie, he never looked back and gave the movies like Don King: Only in America as the lead character, Don King for which he also won a Golden Globe.

Besides movies, he is also popular for TV series. Some of his TV series along with the year and character’s name are-

As of 2020, he has an estimated net worth of $16 million. His earnings as an actor are in the range of $21k to $215k. Besides that, he also makes through his production works.

Ving Rhames has black eyes with a clean-shaved head. Also, his bald head happens to one of his trademarks. He stands at a height of 6 feet and weighs around 87 kg.

You may also read the bio of Max Walker, Lily Tomlin, and Lucas Kavner.