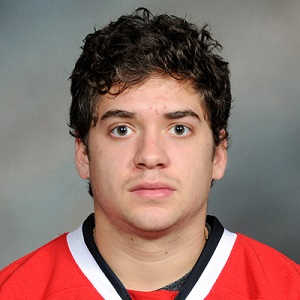 Vinnie Hinostroza has kept his personal life private and out of the spotlight. He usually doesn’t talk about his private life in media and public. He prefers people focusing on his work rather than his personal life. He hasn’t mentioned about his affairs publically and has managed to keep it low profile. There is no any record of his marriage and divorce till now.

Who is Vinnie Hinostroza?

Vinnie Hinostroza is an American professional ice hockey player. He currently plays with the Chicago Blackhawks in the National Hockey League (NHL). Hinostroza was selected by the Blackhawks in the 6th round, 169th overall) of the 2012 NHL Entry Draft. He was named to Hockey East All-Rookie Team in the 2013-14 season.

Vinnie was born on April 3, 1994, in Bartlett, Illinois, USA.  He is the son of Rick Hinostroza and Laura Hinostroza. He is an American by nationality and belongs to Native American ethnicity.

Vinnie began his NHL career during the 2015-16 season with the Chicago Blackhawks. He was previously selected by the Blackhawks in the 6th round of the 2012 NHL Entry Draft. He was assigned to the Blackhawks AHL affiliate, the Rockford IceHogs to begin his professional rookie 2015–16 season.

On October 16, 2015, he was recalled by the Blackhawks and on October 17, 2015, Hinostroza made his NHL debut, playing against the Columbus Blue Jackets.  Hinostroza scored his first career NHL goal against Jacob Markström of the Vancouver Canucks on November 19, 2016. He has an annual salary of $575,000. His net worth is unknown

He has a height of 5 feet 9 inches with a body weight 78 kg. He has dark brown hair color and his eye color is brown.