Vinnie Jones was married to his longtime girlfriend, Tanya Terry on June 25, 1994, in Watford. They have a son and a daughter. His son’s name is Aaron Elliston and he was born in 1991 and he serves the British Army in the Life Guards.

Her daughter’s name is Kaley and she was born in 1987. Vinnie along with his wife was undergoing treatment for skin cancer in November 2013 and they were cured in between 2014 and 2015. 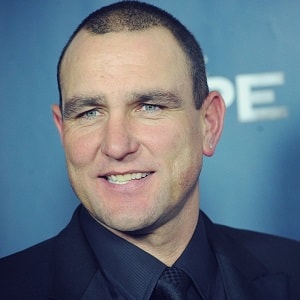 “I've always felt that people put me down, and I'd fight back. I played football for 15 years, and nobody gave me any credit, and they never will do.”

Who is Vinnie Jones?

Vinnie Jones as a British actor and former pro football player and Vinnie Jones is known for his roles in ‘She’s the Man’, ‘The Riddle’, ‘Arrow’, ‘X-Men: The Last Stand’, ‘Absolution’, etc. Jones has been awarded Satellite TV’s ‘Personality of the Year’.

His father used to work as a gamekeeper. He holds British citizenship and his ethnicity is a mix of English and Wales.

He attended Dollis Junior School in Mill Hill, North England and after his family moved to Hertfordshire, he joined Chancellor’s School in Brookmans Park.

Jones loved to play football since his childhood and he played for Bedmond football club from 1975 to 1977. He became the member of ‘Alliance Premier League’ in 1984 and he played for IFK Holmsund, a Swedish club for a season in 1986 and made his team to win Division 3. He was appointed as a full-time football player by Wimbledon F.C in 1986 and he was paid £10,000 and he played there until 1989.

He was transferred to the Leeds United F.C in 1989 and he got promoted to the old Division One. He left in the middle but returned again in 2006 for the testimonial of South African footballer Lucas Radebe.

Jones was sold to Chelsea in 1991 and later absorbed by Wimbledon in 1992. In early 1998, he left Wimbledon to join Queens Park Rangers as a Coach/player and appeared there for 9 matches till 1999. He declared to donate his 1988 FA Cup medal to the A.F.C. Wimbledon fans in a press statement released in June 2010.

He debuted in action films from the British comedy flick ‘Lock, Stock. And Two Smoking Barrels’ on August 28, 1998.

He portrayed the sadistic and violent character of Drake in the action-thriller flick ‘Escape Plan’ in October 2013. His other movies include ‘Fractured’ in 2013, ‘Redirected’ in 2014, ‘The Midnight Man’ in 2016, etc.

He has been awarded Satellite TV’s ‘Personality of the Year’ in 1998 from Satellite TV Europe Magazine, named ‘Man of the Year’ by GQ Magazine in 1998, Best Debut for ‘Lock, Stock and Two Smoking Barrels’ in 1999 at Empire Magazine’s ‘The Awards 1999’, and many more.

Vinnie Jones: Net Worth and Salary

It is estimated that he has a net worth of $10 million and his main source of earning is from his acting and football career.

Jones got media attention during the match of Wimbledon and Newcastle United where he was photographed catching testicles of player Paul Gascoigne.

He was involved in a controversy after he posted the football video ‘Soccer’s Hard Men’ in which there was a picture of many other ‘hard men’ of the game along with him. Jones was fined £10,000 and banned for six months for disreputing the game. Also, he was banned from football indefinitely after he exceeded 40 disciplinary points after which he was summoned to Lancaster Gate but he did not come there.

He has dark brown hair and light blue eyes. He is a tall man with a height of 6 ft 2 inch and he weighs 85kg.