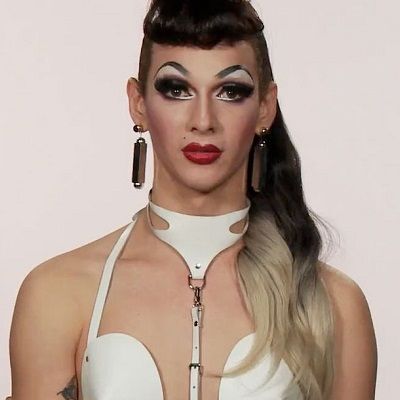 Pain is beauty and I'm the prettiest.

What is the relationship of Violet Chachki?

Violet Chachki is currently single. His physical orientation is genderqueer.

Who is Violet Chachki?

Violet Chachki is a professional model and TV personality. Violet is also a drag queen. burlesque dancer and recording artist.

Likewise, Violet Shared a video of his Tattoo Tour on his YouTube channel.

After watching the 1996 movie Bound, Paul invented and adopted the nick- Violet Blair. He was inspired by the character of Violet played by Jennifer Tilly. Similarly, he added ‘Chachki’, a Yiddish word for a strictly decorative small collectible item such as a trinket.

Violet has two drag mothers, Genre Monster and Dax exclamation point. Genre is a fashion designer and retired drag queen whereas Dax is a contestant of RuPaul’s Drag Race.

Likewise, he has a drag sister, Brigitte Bidet.

He was educated at Atlanta Catholic School and studied fashion design at Savannah College of Art and Design, Peachtree St NW, Atlanta.

However, Paul dropped out of college to focus on his drag career.

When he was 19 years old, he started performing as a drag artist. His first performance was at the bar, LeBuzz in Marietta, Georgia.

He became one of the regular cast members of The Other Show at the bar Jungle in Atlanta. Violet then took a chance and performed with the Drag Race Season 5 contestants.

In the year 2013, he was photographed for Legendary Children and in 2014, he appeared on the cover of the single Cosplay.

In May 2019, Violet attended the Met Gala and wore a glove-shaped Moschino dress and the theme was Camp: Notes on Fashion.

From YouTube, his income is around $2.7k-$43k US. Similarly, he works with Adult Swim, Dita Von Teese, Prada, and Moschino.

You may also read the age, parents, career, net worth, body measurement, and social media of Audra Mari, Kyla Coleman, and Jess Impiazzi