Virgil van Dijk is the World's most expensive center back, currently plays for Liverpool. Despite his health issues during his childhood, he has set a great career. Virgil is in a relationship and has a daughter.

Virgil van Dijk is in a relationship with Rike Nooitgedagt. Rike worked as a sales manager. But to be with her love, she resigned from her job.

The couple is dating for a very long time, they are childhood sweethearts. Apart from her, he has never seen anyone and there is not even a single rumor of an affair.

Cheating on girlfriend while she was pregnant?

Virgil offered Georgie Lyall to sleep with him. This was when his girlfriend, Rike was expecting their baby. Virgil and Georgie were also photographed outside the hotel while they were leaving after having their private time.

Later, Georgie called it quits to pursue her career in nursing. 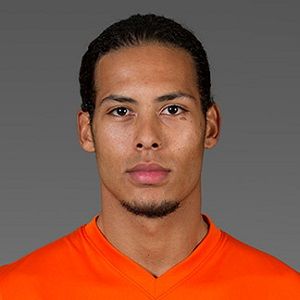 Even before the Champions League final last year [against Real Madrid] I was not nervous at all. I was very relaxed. I was like: ‘Let’s go, let’s do this.

I don’t know what it is. It’s just something I’ve learned over the years and it’s something I’m very happy about. If you’re nervous you think: ‘I don’t want to make mistakes or give the ball away.’ But you limit your own qualities then. Over the years I’ve developed the mindset that there are many more important things in life.

Yeah. I think it’s a very good example to never give up. Keep working for your dreams. Every step of my career was hard work. I’ve given everything I’ve got but I’ve still got more to come in every aspect of my game. Maybe they were right at the time. Maybe it was meant to be that they didn’t want to take a chance with me. As a young player in the academy for a mid-table club the next step is one of the top four teams. That was my plan as well – but it didn’t happen.

Who is Virgil van Dijk?

Virgil van Dijk is a Dutch professional football player who plays as a center-back.

Currently, he has signed to Liverpool for £75 million from Southampton. Dijk is named ‘player of the match’ in the premier league against Manchester United held on 19th January 2020.

Previously, he has played for Southampton, Celtic, and Groningen. As an international player, Virgil has represented the Dutch U19 and U21 teams before playing for the senior team.

Virgil was born on 8 July 1991, Breda, Netherlands. Talking about his nationality, he is Dutch and his ethnicity is Mixed (Dutch-Surinamese).

He is the son of Ray Van Dyke, father, and Hellen Fo Sieeuw, mother.

From the beginning of his childhood, he had a keen interest in football and began to play at a very early age.

But when he was young, he had abdominal and growth complications, luckily, he recovered. His parents were very happy after hearing this.

Virgil began his career with Willem II. In 2010, he moved to Groningen on a free transfer. During his two seasons at Groningen, he appeared in 62 matches and scored seven goals.

On 21 June 2013, the Dutch international signed with Celtic for a fee of around £2.6 million on a four-year contract. Furthermore, he made his debut on August 17, 2013. Later, on 9 November, he scored his first goal in a 4–1 win against Ross County. He helped his team to win the league scoring a free-kick.

Moreover, Virgil signed a five-year contract with Premier League club Southampton for a fee of £13 million. Later, he made his debut against West Bromwich Albion. In the 2015-16 season, he also became the Southampton Player of the Season. Recently, on 27 December 2017, Liverpool confirmed the signing of Virgil from Southampton for a record-breaking fee of £75 million. The transfer will take place on January 1 when the transfer window opens.

Concerning his international career, he has already represented Netherlands U19 and U21 levels. On 10 October 2015, the 26-year-old made his full international debut in a 2–1 victory away from home against Kazakhstan in a UEFA Euro 2016 qualifier. As of now, Virgil has played in 16 matches for the Netherlands senior team.

On 19th January 2020, in a premier league against Manchester United, Liverpool won 2-0, and Virgil was the player of the match.

Being a professional football player, he pockets an enormous amount of money from his profession.

So far, there are not any drastic rumors regarding his personal and professional life. Furthermore, he has never faced any controversy to date. It seems he has a full concentration on his career rather than being stuck in any controversy.

Virgil van Dijk has a height of 6 ft 4 inches and weighs 92 kg. Furthermore, he has a black pair of eyes and black hair. Moreover, there is not any information regarding his other body measurements.