Virginia Wade is a former British professional tennis player. She has kept her romantic life low-key. 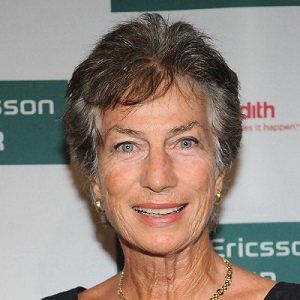 It's difficult for most people to imagine the creative process in tennis. Seemingly it's just an athletic matter of hitting the ball consistently well within the boundaries of the court. That analysis is just as specious as thinking that the difficulty in portraying King Lear on stage is learning all the lines

Tennis is a fine balance between determination and tiredness.

What is the relationship of Virginia Wade?

Virginia Wade is an unmarried woman who is possibly single. She has not shared her current affair or her boyfriend’s detail.

She keeps her personal life very secret and never talked about her relationship in public.

If there is any detailed info about her relationship status then it’ll be updated.

Who is Virginia Wade?

She was the No.1 British player for over a decade in her time.

Virginia has collected several trophies in her career which also including the famous Wimbledon title in 1977. She feels so lucky to receive such a precious trophy from Queen Elizabeth II.

In addition, she has also managed to lift some other famous titles which include Australian Open and U.S Open in both singles and doubles.

Moreover, she was ranked in the world’s top 10 for consecutive 13 years.

Talking about her early life she was born on 10 July 1945 in Bournemouth, England. The name of her father and mother are behind the curtain.

She belongs to English heritage. Further, she experienced her childhood in South Africa with her parents at the age of one where she also started to play tennis.

Regarding her education, she attended  Tunbridge Wells Girls’ Grammar School and Talbot Heath School in Bournemouth.

Moreover, she graduated from the University of Sussex in 1966.

Virginia had a keen interest in tennis from a very early age. So, she decided to make it her profession.

In 1961, at the young age of 16,  she got the chance to play on the tennis team of Wimbledon County Girls’ Grammar School.

Her first major trophy came in 1968 when she won the women’s singles at the first U.S Open.

In 1972, she claimed her second grand slam title at the Australian Open, where she defeated the Australian Evonne Goolagong in the final in straight sets 6–4, 6–4.

In addition, she lifted 1977 Wimbledon on the auspicious occasion of Queen’s silver jubilee and the 100th anniversary of Wimbledon, beating Betty Stöve in three sets in the final.

In doubles, he lifted the U.S Open twice in his career, Australian Open, and the French Open.

She was a professional tennis player for 26 years.

Wade retired from international in 1985 from singles and in 1986 from doubles, where he played 26 times at Wimbledon.

Concerning his achievements and awards, she has achieved almost everything which a tennis player wants to.

To date, Virginia Wade has managed to keep his life simple and out of the spotlight.

She hasn’t faced any controversy yet. There weren’t any rumors regarding his personal and professional life.

Talking about her body measurement, she is height is 5 ft 7 inches and weighs 61 kg.

However, her eye color is blue and her hair color is turned grey.

She is not yet wedded nor she has any kids.

Why was Virginia Wade in South Africa?

She spent her childhood there.

Where does Virginia Wade come from?