Viveca Pauline is a Swedish actress, producer and auctioneer. Viveca is married and has three kids.

Viveca Pauline’s relationship status is happily married to her husband Will Ferrell on 12th August 2000.

Will is a famous American actor, comedian, producer, writer, and businessman.

Will and Viveca met in Los Angeles in 1995, after they both attended an acting class. The pair dated briefly, before eventually breaking up when Will landed Saturday Night Live and left for New York City. Though they stayed friends, Will regarded Viv as ”the one that got away”.

During an SNL hiatus five years later, the couple reconnected and started dating. Ferrel proposed Viveca on a romantic date night at the beach and eventually got married in August 2000. They now have three sons: Magnus, 14, Mattias, 11, and Axel, 8. 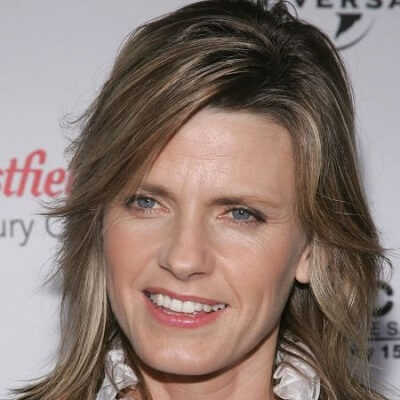 “Being around the auction houses made the transition to collecting an easy one, particularly with prints,” “I am drawn to artists that think differently than I do.”

Who is Viveca Paulin?

Viveca Paulin is Swedish actress and producer notable for her works in Money Talk (1997), A Night at the Roxbury (1998) and Ralph Breaks the Internet (2018).

Viveca is also the wife of well known American actor Will Ferrel.

Further, she is also an auctioneer currently working at Los Angeles Modern Auctions.

Viveca was born as Viveca Birgitta Paulin on April 24, 1969 in Askim, Göteborg och Bohus län, Sweden. She is currently 51 years old and is of Swedish ancestry.

She arrived in the USA for her studies at Pomona College in California to study Art history and graduated in 1991. During this time, she joined an acting class where she met her now-husband, Will Ferrel, for the first time.

Viveca as an actress

The 51 years old actress has appeared in 1998 movie A Night at the Roxbury alongside her husband Will. In the movie, she has portrayed the role of Gigi Rice.

She has played the role of an auctioneer in movies, Money Talks, and Ralph Breaks the Internet (2018) and in comedy-crime series Martial Law (1998). Further, she appeared as Annika Bjornberg on Younger.

She has also appeared as herself on several talk shows. She was a guest on two episodes of the Oprah Winfrey Show, and she acted opposite Ferrell during a 2010 episode of the Tonight Show with Conan O’Brien. During that time, She was pregnant and gave birth to her son Axel a few hours after the appearance.

Viveca as an auctioneer

After her graduation, Viveca worked as an independent auctioneer for clients, including Bonhams and Butterfield & Butterfield, and is an auctioneer at the Los Angeles Modern Auctions. She is on the Board of Trustees of the Los Angeles County Museum of Art and a supporter of the Hammer Museum, the Museum of Contemporary Art, and the MAK Center, with her husband.

How Much Does Viveca Paulin Earn?

The Swedish actress has an estimated net worth of $80 million as of 2022.

The movie A Night at the Roxbury where she appeared was a huge success. It earned $30 million USD in the box office.

Her husband Will has a net worth of around $160 million. Much of hid earning comes from his acting career. He is one of the highest-paid actors in the world, commanding $20+ million for a single film.

Viveca has blue eyes with blonde hair. She is 5 feet and 9 inches tall and weighs around 64 kg.

You may also know about body measurements, net worth, and professional career of Nikki Ferrell, Conchata Ferrell, and Helena Mattsson.