Updated On November 15, 2022 | Published By: Leena
Share this
Single 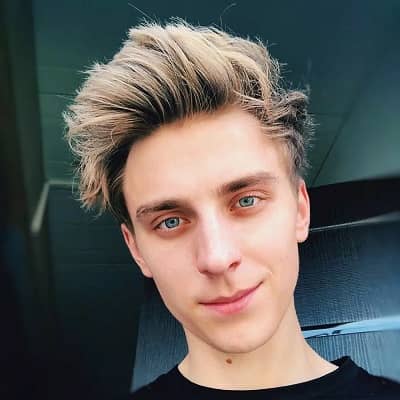 What is the relationship of Vlad Bumaga?

Vlad Bumaga is currently single and is not dating anyone. He prefers to keep his personal life private.

Without any indication about his relationship, his silence has surely caused the public to believe that he is single. Despite his popularity, he has kept everything a secret.

Who is Vlad Bumaga?

Vladislav Bumaga was born in Minsk on June 5, 1996, into the family of Andrei Bumaga, a primary school teacher and engineer. The man spent his childhood in the Serebryanka micro-district. He holds a Belarusian identity.

However, he hasn’t disclosed his parents’ names. There is no information about his siblings. Also, he has been secretive regarding his educational qualification. Thus, we don’t have information on which college he attended to pursue his education.

Vlad Bumaga played hockey for nine years, as a forward in the children’s and young sports schools “Dynamo” and “Youth.” He retired from sports after an injury. He relocated to Moscow at the end of 2021.

Bumaga registered his YouTube account with the name” A4 ” on November 29, 2014, a play on his real name Bumaga. After the release of the movie “24 hours in the trampoline facility“, the number of subscribers grew from 200 thousand to one million people in 2016.

Vladislav was ranked 9th among the most popular video bloggers on YouTube in 2019, according to the YouTube Rewind video, with 2 million views on the video “I buy everything that you can take away from the store!“. Vlad was the second most popular Russian-speaking YouTube blogger in September 2019, according to the analytical service Brand Analytics.

He was a guest on the Evening Urgent show on February 7, 2020. His A4 channel’s films have been seen over 13.8 billion times, including the popular “Night in the Closed Ice Arena.”

Vlad Bumaga earns a certain amount from his Youtube channel ‘A4’. According to the social blade, his estimated monthly income is 149.4k-$2.4million and his yearly estimated income is 1.8million- $28.7million. He has an estimated net worth of $20 million as of 2022.

However, his exact salary, income, and earnings are not disclosed yet.

MrBeast tweeted on February 19, 2021, “The largest station in Russia just grabs my thumbnails and photoshops his face on mine”, causing huge controversy with A4 taking several of his thumbnails.

On March 14th, Timeworks released a video titled Is This Russian Youtuber Duplicating Mrbeast, in which he exposes A4 for copying Mrbeast thumbnails and claims that he simply modifies his face in the thumbnails.

Vlad Bumaga stands tall at a height of 5 feet and 9inch and weighs around 70kgs.

He has a dashing personality with a pair of beautiful blue eyes and blonde hair color which suits his personality.

Vlad Bumaga is seen as highly active on social networking sites. He has a huge fan following on his Instagram account under the username @a4omg with7million subscribers. Similarly, he has garnered more than a 10.9million followers on Tiktok.

He has his own Youtube channel under the username A4 where he has gained over 39.3million subscribers.