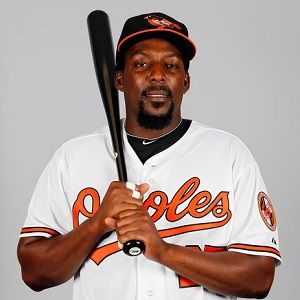 Likewise, his son is a professional third baseman for the  Toronto Blue Jays of Major League Baseball. Further, he is considered the top prospect in all of professional baseball by both MLB and Baseball America.

Who is Vladimir Guerrero?

He was born on 9th February 1975 in Nizao, Dominican Republic. He is the son of Damian Guerrero and Altagracia Alvino. His parents had nine children. Similarly, his younger brother was ex-major leaguer who played with the Montreal Expos.

Likewise, he is also the cousin of minor leaguer Cristian Guerrero and the uncle of Miami Marlins farmhand Gabriel Guerrero. Likewise, he belongs to American and Dominican nationality and his ethnicity is Dominican.

Talking about his education, there is no information about the school, college, and university he went to.

In his baseball career, he played for the Montreal Expos (1996–2003), Anaheim Angels / Los Angeles Angels of Anaheim (2004–2009), Texas Rangers (2010), and Baltimore Orioles (2011). He was widely recognized for his impressive offensive production regularly hitting for power and average. He was known for his defensive range and strong throwing arm.

In the year 2004, he was voted the American League (AL) Most Valuable Player (MVP). Regarded as the game’s premier “bad-ball hitter,” he consistently hit balls that are thrown well outside the strike zone. Likewise, with his aggressive batting style, he hit more than 30 home runs (HR) in each of 8 seasons.  Likewise, he surpassed 100 runs batted in (RBI) 10 times, though he had just 2 seasons with at least 65 walks.

Similarly, in the first pitch of an at-bat, he hit 126 home runs and put 1,780 balls in play. On September 26, 2011, he surpassed Julio Franco as the all-time MLB leader for hits by a Dominican player. Likewise, he was inducted into the National Baseball Hall of Fame, in 2018.

On March 31, 2014, he signed a one-day contract with the Los Angeles Angels of Anaheim and officially retired from professional baseball.

He has won many awards. He won the American League Most Valuable Player in the year 2004. Similarly, he won Edgar Martínez Outstanding Designated Hitter Award, Eastern League MVP, and Double-A Player of the Year. He won the MLB All-Star Award nine times from the year 1999 to 2010 except for 2003, 2008 and 2009.

Similarly, he won Silver Slugger Award winner eight times. He won Montreal Expos Minor League Player of the Year two times and many other awards. Likewise, he won Eastern League All-Star OF in 1996 and Eastern League Rookie of the Year the same year.

The estimated net worth of Vladimir is around $60 million. Similarly, on January 11, 2010, he signed a one-year for $5.5 million deal with incentives with Texas Rangers. He Signed a five-year contract for $70 million after the 2003 season with Anaheim Angels.

Similarly, he might earn a huge amount of money from his career but there is no information about his salary. He has a $3.8 million home in Anaheim, California(CA), the US which he purchased in 2004 for $2.75 million.

There is no any big rumors and controversy of Vladimir Guerrero. He is successful in maintaining his life away from rumors.

Vladimir Guerrero has a height of 6 feet 3 inches and his weight is 107kg. Similarly, his hair color is black and he has black color eyes as well.