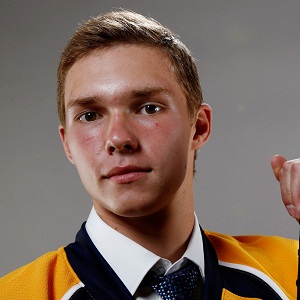 What is the relationship of Vladislav Kamenev?

Vladislav Kamenev is having an affair with Sopchuk Tata. The couple is quite open about their affair and keeps posting their photos on their social media handle, Instagram.

Vladislav is so much in love with his girlfriend Sopchuk that they might get married soon.

Who is Vladislav Kamenev?

Vladislav Kamenev is a Russian ice hockey player. He is currently playing with the Milwaukee Admirals in the American Hockey League (AHL) as a prospect for the Nashville Predators of the National Hockey League (NHL).

Kamenev was selected by the Predators in the second round (42nd overall) of the 2014 NHL Entry Draft.

Kamenev was born Vladislav Dmitrievich Kamenev on August 12, 1996, in Orsk, Russia. His nationality is Russian and his ethnicity is Asian-European.

Other than his date of birth and his birthplace, nothing much information is known to the mainstream media yet. This includes the whereabouts of his parents, siblings, early childhood and teenage days, his educational background and qualification, etc.

He, however, may have played ice hockey from his school life, later going on to continue in the professional ice hockey leagues in both his home country and abroad.

At the conclusion of his first full KHL season in 2014–15 with Metallurg Magnitogorsk, Kamenev opted to pursue his National Hockey League (NHL) ambitions, in agreeing to a three-year entry-level contract with the Nashville Predators on July 10, 2015.

Kamenev had his NHL debut on Jan. 6 against the Florida Panthers, after being recalled by the Predators from the Milwaukee Admirals. During an interview, Kamenev recalled being at the Florida airport just about an hour before the 2017 Fort Lauderdale airport shooting, as he was traveling to reach the team after playing a game in California with the Admirals.

Apart from that, he has also represented Russia in various international tournaments. Some are World U17 Hockey Challenge 2013, held in Yarmouth, where the team won the silver medal. In Ivan Hlinka Memorial Tournament 2013, the Russian team was placed in the fourth position. The Russian team became fifth in the IIHF World U18 Championships held in 2014. Similarly, he played for Russia in World Junior Ice Hockey Championships in 2015 and 2016, held respectively in Canada and Finland respectively. In both tournaments, the team won silver medals.

Kamenev has not been dragged into much greater controversies or rumors. He, however, has been dragged into rumors regarding his injury. He has, thus far, managed to keep a clean image in the eyes of the public and fans.