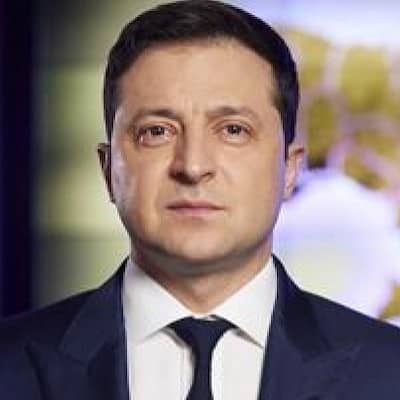 Brief about personal life of President of Ukraine!

Volodymyr Zelenskyy at present is a married man. He exchanged vows with Olena Kiyashko on 06 Sep 2003 but their wedding details are not disclosed.

His wife is a screenwriter and they knew each other since their childhood.

This couple is blessed with two children. Their daughter Oleksandra was born in July 2004 and was seen in the 2014’s movie 8 New Dates. Then in Jan 2013, they welcomed their second kid, a son named Kyrylo.

Who is Volodymyr Zelenskyy?

He was previously with the Independent political party and is now with Servant of the People that he joined in 2018.

At the present time, Ukraine is invaded by Russia he called for martial law across the whole country.

The attack was started to take effect first in 2021 when the Russian military gathered at the border of Ukraine. After a year, on 24 Feb 2022, Vladimir Putin, President of Russia announced the military operation in Ukraine. Then Volodymyr declared martial law when missiles were launched by Russians at Ukrainian military bases.

The war was later targeted to the public and Ukraine started to receive global recognition for its leaders of other countries. They helped Ukraine by supplying arms and other materials.

His birthdate is 25 Jan 1978 and he was born in Kryvyi Rih, Ukrainian SSR, the Soviet Union as Volodymyr Oleksandrovych Zelenskyy. The name of his mother is Rimma Zelenskaya and his father’s identity is Oleksandr Zelensky.

His mom is was an engineer while his dad works at the Kryvyi Rih State University of Economics and Technology.

Further, Volodymyr Zelenskyy’s ancestry is Ukrainian and as per his academics, he went to the Kyiv National Economic University to study Law.

He shifted his interest to politics and ran for the presidential election in 2018. At first, he conducted a virtual presidential campaign which he won in the first round. Then on 21 April 2019, he removed Petro Poroshenko and sat on the president’s chair.

Since Volodymyr Zelenskyy’s time as the president, he regularly promotes the areas where Ukrainian- and Russia are spoken. He also helped in reducing corruption and focusing on social media for effective communication.

This President was found to extract the extra information of Joe Biden who was then a rival of Donald Trump. Trump pressured him to do this by blocking the payment for a military aid package to Ukraine in Sep 2019.

Moreover, Volodymyr was criticized when he said “Romania occupied Northern Bukovina” in Jan 2020. Later, he apologized by saying there was a translation error from Ukrainian to Romanian.

Volodymyr Zelenskyy’s height is 5 ft 6 inches and his body weight is 63 kg. Adding some more, he has dark brown eyes and has hair in black color.

Volodymyr Zelenskyy is officially available on several social sites. He has more than 14M and 713k followers on Facebook and Instagram.

World’s Reaction and Condolences over the Assassination of Japan’s ex-PM Shinzo Abe!