Von Miller’s relationship status at present is assumed to be single. He has not shared the details regarding his current girlfriend or affair with the public.

But he had a rough affair with a model Megan Denise. They started to date in 2018 and later got engaged too. When things did not work out, they decided to part away.

Then in Jan 2021, his former girlfriend surfaced news of her getting pregnant and she said that the father is Von. However, she after a while shared the news of having a miscarriage and blamed Von for wishing this. 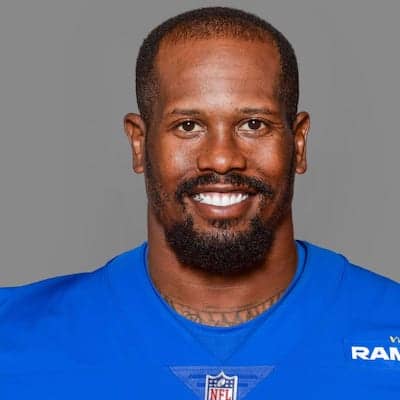 Who is Von Miller?

Von Miller is a football player of American nationality. Von Miller plays as an Outside linebacker who is with a college football team Buffalo Bills.

He played the matches with teams like the Denver Broncos, Los Angeles Rams, and more. For his amazing playing, Von was given the title of Most Valuable Player of Super Bowl 50 in the year 2016.

He was seen dancing in a dance reality show Dancing with the Stars in its 22nd season. But he along with his dance partner Witney Carson and became in 8th place.

His birthdate is 26 March 1989 and he was born in DeSoto, Texas, the United States as Vonnie B’Vsean Miller Jr. The name of his mother is Gloria Miller and his father’s identity is Von Miller.

They both run a successful power supply business. Moreover, Miller’s ancestry is All-American, and has a younger brother named Vince.

As per his academics, he passed out from attended DeSoto High School. Then he enrolled at Texas A&M University for his further studies in Poultry science.

Von Miller in his high school as well as University days played football. He then went to join the NFL. He was first selected by Denver Broncos in 2011. with this team, he played for around 10 years.

Then, he joined another team in Los Angeles Rams in 2021 but only for short time. After a year, on March 16, Miller was drafted by the Buffalo Bills. With them, he signed a six-year with a whopping amount of $120 million.

By 2022’s sources, he has an estimated net worth of $40 million. Additionally, his yearly salary which he gets from his career is $15 million per year.

This player of Georgia Bulldogs football is keeping himself away from scandals as well as rumors at present.

But in the past, he was covered by many troubles. He was arrested related to driving charges in Aug 2013. Then in 2018, he was charged for improperly catching and releasing a hammerhead shark in Florida.

Further, he was also infected with COVID-19 in April 2020, and fortunately, he recovered in May of the same year.

Von Miller’s height is 6 ft 3 inches and his body weight is 113 kg. On top of that, he has black hair and eyes in dark brown color.

Von Miller is officially present on social sites such as Instagram with around 2M fans and on Twitter, he has over 519k followers. But he is not accessible on Facebook and TikTok.

His own YouTube channel is subscribed to by more than 34k people.

Celebrity tanning expert Jules von Hep talks about his skills and experience in the field!

Keke Wyatt, 39 Is Expecting Her Baby No. 11 With Husband Zackariah Darring! ‘The actress is making a football team’