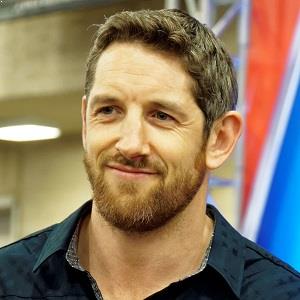 One day I started cheating. After that, I started winning everything

When I was on Raw, I was like Julius Caesar, an all-powerful conquering hero who became so powerful that everyone around him had to conspire against him

Wade Barrett was involved in a relationship with WWE diva Victoria Crawford, known in WWE as Alicia Fox. The relationship ended and the cause of the break-up is not known.

He was then involved in a relationship with a Canadian television host, broadcaster, and journalist Rachel David which eventually came to an end.

Bennett is currently single and the future of his relationship status has not been disclosed by this Englishman.

Who is Wade Barrett?

He was the winner of the first season of NXT in 2010 and he later made his Raw debut on 7 June 2010 rising to prominence as the leader of the famous group The Nexus, composed of the remaining NXT rookies of season 1. Bennett left WWE in May 2016 to focus on his acting career.

Bennett was born in Penwortham, United Kingdom on 10 August 1980 and lived there until the age of six. His ethnicity is Caucasian.

Details about his father and mother are not revealed.

He has often stated that Davey Boy Smith and Bret Hart are among his childhood heroes who inspired him to become a professional wrestler.

He attended the University of Liverpool and has a degree in marine biology.

Bennett entered the world of professional wrestling at the age of 21 and was trained by Jon Ritchie and Al Snow. After successful projects like Ohio Valley Wrestling (2006–2008), Florida Championship Wrestling (2008–2010), The Nexus (2010–2011), The Corre, The Barrett Barrage, Bad News Barrett (2013–2015), he soon became one of the most successful wrestlers of his generation.

It was announced on 6 May that Bennett had been released by WWE. Although the exact date of his possible return to WWE is not confirmed he said that he would be “back in the ring when the time is right”. Bennett had a small role in the 2013 crime-thriller film ‘Dead Man Down’. It was announced in April 2015 that he would star as “Europe’s most dangerous assassin” in a WWE Studios-Richwater Films action-thriller film titled Eliminators.

The salary that Bennett made as a professional wrestler was $550,000 annually which resulted in his net worth to be a total of about $ 7 million.

Although Bennett has been involved in some controversies during his wrestling career, none of them are worth mentioning. He has not been part of any recent rumors.

Wade Barrett has a relatively tall height of 6 foot 7 inches, 200 cm. He weighs 256 pounds or 116 kg. His hair color is light brown and eye color is brown.