Hayes is a married man. Hayes was married to Danni Boatwright on  April 4, 1999. Danni is a former Miss USA runner-up and actress who appeared in the video for Hayes’ single “Tore Up from the Floor Up”. Later, The couple divorced in 2003. On September 25, 2018, Hayes became engaged to Lea Bayer.  They were married on January 25, 2019. 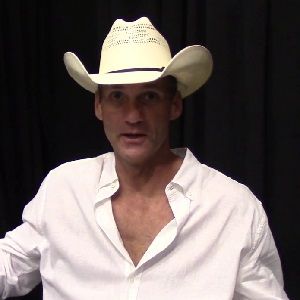 I'm old enough to know better, but I'm still too young to care.

Who is Wade Hayes?

Wade Hayes is a popular American country music artist. He has signed to Columbia Records in 1994, and working with them he was able to make his debut that year with his gold-certified album Old Enough to Know Better.

Wade Hayes was born on April 20, 1969, and raised in Bethel Acres, Oklahoma. His father’s name is Don Hayes, who is also a professional country musician. Wade was inspired to join the musical industry by his father.

Initially, Hayes in his childhood uses to play mandolin, and after seeing it his father bought him the guitar. Then he started to play it. His family moved to Nashville, Tennessee when he was eleven years old.

There his father signed with an independent record label but it came to be a bankruptcy. And they again return to Oklahoma. He also has Stacey and Charity two sisters in his family.

He gets inspiration to write his songs after seeing Ricky Skaggs‘ performance at the 1991 Country Music Association Awards.

Then Wade returned to Nashville and started to record his demo tapes and write his material. No sooner did he partners with a songwriter named Chick Rains and started his career.

Wade Hayes has attended three different colleges since he gets dropped out of college in 1991. He moved on to build up his career in country music and was drop out.

When returning to Nashville he paired up with Chick Rains. He was arranged for an audition for the vocalist with record producer Don Cook (the Mavericks, Brooks & Dunn).

He was able to impress him and this was his major turnover to build his career. Then they thought of working together. Wade gets signed eventually in the contact with executives at Columbia Records.

Working forward he released his debut album in 1995 entitled Old Enough to Know Better. The track was an immediate hit and was able to become on a number one single list.

The Academy of Country Music also nominated him for Top New Male Vocalist of the Year for 1995 from this song. no sooner did he come out with his second album, On a Good Night. it was released in the summer of 1996. But it wasn’t able to gain the same hit as the first one but receive commercially good sales.

And in 1998, his third album was released entitled When the Wrong One Loves You Right. The song was also so popular and it was generating a Top 10 hit.

Then respectively he releases Highways and Heartaches in the year 2000. Hayes gets separated from Monument Records and formed a duo with Mark McClurg called McHayes in 2003.

This pair recorded an album for Universal South. But it couldn’t get much popularity. Then he releases his first single, “It Doesn’t Mean I Don’t Love You,”. It received good comments and was good reaching 41’s country charts. The label shelved the record and their duo gets separated in 2004.

Hayes was then out of the industry and was away from the spotlight for up to four years. He has come back in the year 2008 to play the guitar with Randy Owen’s touring group. Then he again released Place to Turn Around in 2009.

He was diagnosed with colon cancer and it disturbs his career to move forward. But he was back again with a successful recovery. The musician resurfaced in 2015 with Go Live Your Life, which was released on Conabor Records.

There are not any rumors about his personal and professional life. He doesn’t seem to share his matters on social media. And he is doing his best job without harming others and has been a private person in his life, for which he has not been in any controversy.

Wade Hayes stands with a tall height of 6 feet 2 inches. His weight is unknown. Likely he has hazel-colored eyes and brown-colored hair.