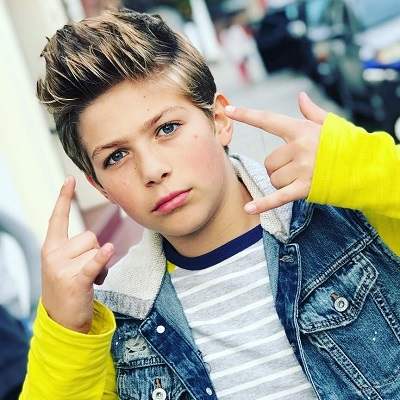 They are young but still care and love each other. They both appeared in several videos showing their feeling toward each other as well as their connection.

As of February 9, 2020, Bryant premiered a video title, Got Married To My Crush for 24 Hours Challenge * Romantic Wedding.

In this video, they pretend, like a real bride and groom, and got married for 24 hours challenge. He also featured his other friends in these videos.

Who is Walker Bryant?

Walker Bryant was born on September 26, 2006, in Columbus, Ohio, United States. His birth sign is Libra.

He grew up in his hometown. Later, Walker and his mother, Jennifer Bryant moved to Los Angeles.

His other family member’s information has not been disclosed yet.

Bryant has 270k followers on the TikTok account with id @WalkerJbryant and reached more than 3.4 million likes.

He became a TikTok sensation after posting his comic, dance, and lip-syncs videos on TikTok.

He mostly collaborates with his girlfriend, Piper Rockelle, and his friends to make a video more interesting and funny.

Bryant has 366 k subscribers on his self-titled YouTube channel. He joined the YouTube community on November 16, 2016. His channel has reached views in million.

Bryant mostly makes a video about his daily activities and a mixture of different interesting content.

He is an actor and wants to improve his craft to land a big role in the future. He loved to entertain others through his Youtube channel.

His popular upload video titled, INSTAGRAM Followers Control My FIRST DATE Challenge **OUR FIRST KISS**|Walker Bryant, has over 3 million views on it.

Bryant has 437 k followers on Instagram and about 830 posts have already been published on his Instagram wall.

Bryant is a member as well as represented by Momentum Talent Agency & Osbrink Agency. At first, he shared his lifestyle and modeling-based picture through his Instagram account.

In 2016, Bryant started his acting career as a Clown, in the short film, 8 1/2. In the same year, he also played another short film Lauren park.

He appeared in several other short films such as Link: Legend of Zelda, The Plastic Man, Jack, and Innocence, in 2017.

Bryant’s estimated net worth is around $500 thousand.

His earning as a TikTok star is around $120 the US per video or above.

He is young and not involved in any rumors and controversy until now.

He joined the Twitter community in October 2019. He has fewer fans and followers on these social media as compared to 1.1 million Instagram and Tiktok.