Walker Zimmerman is a married man. Walker tied the knot with Sally Tucker on December 31, 2016, in 101 W McBee Avenue, Greenville. The beautiful couple was dating from their college days. 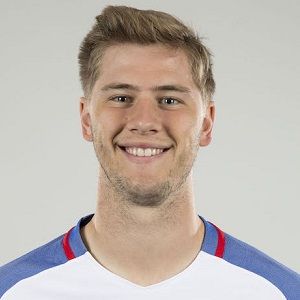 Who is Walker Zimmerman?

Prior to the senior team, Walker had also played for the United States U18, U20, and U23 national team.

He was born on May 19, 1993, in Lawrenceville, Georgia, United States, as Walker Dwain Zimmerman. He holds an ethnicity of Caucasian.

Concerning his education, he joined a local high school in Georgia and later attended Furman University. However, he played only one season there.

In the first year at the university, he was selected as Southern Conference Freshman of the Year in 2011.

Walker Zimmerman began his soccer career as a college player. In 2011, he signed with Furman Paladins and appeared in 39 matches for the side scoring 11 goals. As a professional soccer player, Walker moved to FC Dallas in the first round of the 2013 MLS SuperDraft.

He played his first match on May 11, 2013, coming as a substitute in a victory over D.C. United. Walker developed himself as a skilled player over the years same as the other young player Kellyn Acosta and Matt Hedges.

He has been the regular starter for the side in every match. So far, Walker has netted six goals in 77 matches for FC Dallas.

Then from 2018-19, this player was with Los Angeles FC team. After this, he joined another soccer team Nashville SC in Feb 2020.

Before playing for the senior side, Walker was named in the squad for the United States U18, U20, and U23 side. Walker received his first international cap on 3 February 2017, in a friendly against Jamaica.

This sportsperson’s estimated net worth is $500 thousand. Currently, he receives $205,000 as an annual salary.

Back in March 2017, Walker was targeted by two German clubs. As per the rumors, VfB Stuttgart and Hannover 96 had a heavy interest to sign the youngster.

However, he didn’t respond to this news as he decided to stay at his present club FC Dallas. Apart from that, there aren’t any desperate rumors regarding his professional and personal life.

Moving towards his body measurements, Walker Zimmerman has a height of 6 ft 3 inches and weighs 84 kg. He has hazel blue eyes and brown hair.