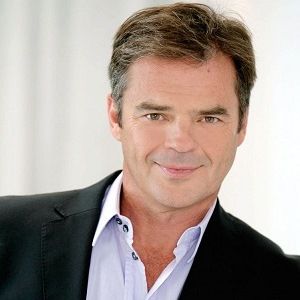 Wally Kurth has married thrice. He married Cynthia Ettinger in 1990 and divorced her in 1993. Next, he married Rena Sofer in 1995, but the marriage fell apart in 1997.

He has two other children: Rosabel Rosalind Kurth, Meghann Kurth. Today, he is married to Debra Yuhasz, whom he married on July 4, 2003. They have one child, Brogan George.

Who is Wally Kurth?

Wally is an American singer and television performer.

He is best known for his work on the soap opera General Hospital as the second Ned Ashton, which he has portrayed since 1993. He also played the character of Sam Hutchins on As the World Turns for several months in late 2007/early 2008.

Wally Kurth was born in Billings, Montana, the United States on July 31, 1958, and he is currently 60 years old. His father’s name is There is no information about his parents.  He grew up with a strong interest in acting and music and studied music and theater at UCLA.

He has four siblings namely, Vicki, Kevin, Sid, and Brian. Wally holds American citizenship, but his ethnicity is unknown. His birth sign is Leo.

The well-known actor Wally Kurth has completed his graduation from the University of California, Los Angeles.

On talking about his profession, Wally Kurth made his debut in ‘Days of Our Lives’, an American daytime soap opera aired on the NBC television network, in the main role of Justin Kiriakis. He also continued in the show till 1991 and was recast in the same role in 2009.

Additionally, he hosted his own SOAPNet show, ‘1 Day With’, in which he spent a day with another television actor. In addition, he did the show with several of his ‘General Hospital’ co-actors like Tamara Braun, Alicia Leigh Willis, Ingo Rademacher, Anthony Geary, and others.

Besides action, Wally is also passionate about music and had formed a band, Kurth, and Taylor, with his partner Christian Taylor in 1992. They added their high school friends Lee Beverly on bass guitar, Jim Bloodgood on drums, and Pat McCormack on guitar.

Wally Kurth has also produced a documentary titled ‘Class C’, which is a feature-length documentary about five basketball teams from Montana’s smallest schools, and their journey to win the state championship.

During 2002 he has bagged the Daytime Emmy Award for Outstanding Original Song for ‘General Hospital’. During 2009, he won the Best of the Festival at Fort Collins TriMedia Festival for ‘Class C: The Only Game in Town’.

There was a rumor that the actor, who was taken off contract at “Days of our Lives” where he plays Justin Kiriakis, is now able to return to “General Hospital” to reprise his role of Ned Ashton. He is far from rumors and controversies.

Wally Kurth has a height of 5 feet 11 inches. Additionally, he weighs is unknown. Wally’s hair color is dark brown and his eye color is blue.

Also, read the affair, salary, the net worth, controversy, and the bio of  Billy Miller, Jack Wagner, Maurice Benard