Basketball player Walter Hermann is married and is a father of three.

Reflecting on the personal life of Walter Hermann, he is married to a Spanish doctor Elena. This couple has two children, Barbara (named after Hermann’s deceased sister) and Leyton.

Hermann also has a son, Federico, from his previous relationship.

Previously he was also engaged to another lady but unfortunately, his fiancee died in a car accident along with his mother and younger sister in July 2003.

Exactly after one year time period, his father also passed away due to a heart attack. 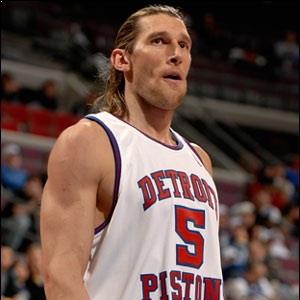 Who is Walter Herrmann?

Walter Herrmann is an Argentine well-known professional basketball player. He is best known as the player for Obras Sanitarias.

Walter was born on 26 June 1979 in Venado Tuerto, Sante Fe. He is of German ethnicity and has an Argentine nationality.

He is the son of Hector Herrmann(father) and Maria Cristina(mother). His birth name is Walter Herrmann Heinrich.

He has one younger sister with whom he was raised. Since childhood, he has built up a strong interest in basketball sports.

There isn’t much information about his early life and education system.

He joined Spanish ACB League club Baloncesto Fuenlabrada for the 2002-03 season and then joined Unicaja Málaga.

Walter signed a 4-year contract worth 5.05 million euros with Saski Baskonia but soon left the team to join NBA. He signed a one-year contract worth $1.8 million with the Charlotte Bobcats in 2006. In March 2007, he has won the NBA Eastern Conference Rookie of the Month Award.

On 14 December 2007, he was traded to the Detroit Pistons in exchange for Nazr Mohammed. On 2 August 2008, he signed a contract extension for one year with the Pistons.

Walter’s net worth is estimated to be $1.5 Million. However, his salary is unknown. Seeing his performance in this field we can assume that he earns a good salary.

Walter Herrmann has a height of 6 feet 9 inches and weighs 102 kg. His hair color is blond and his eye color is dark brown. His shoe size is unknown.