Warren Oates was popular for featuring in The Wild Bunch (1969).

Warren Oates was married to his fourth wife at the time when he kicked the bucket. He exchanged vows with Judy A. Jones on 24 August 1977.

Previously, he was married to Vickery Turner from 21 June 1969 to 16 November 1974 but their wedding plus divorce details are hidden.

Warren for the second time git married Teddy Louise Farmer on 22 August 1959 with whom he has three children. Two of them are, daughter Jennifer Oates and son Tim Oates. 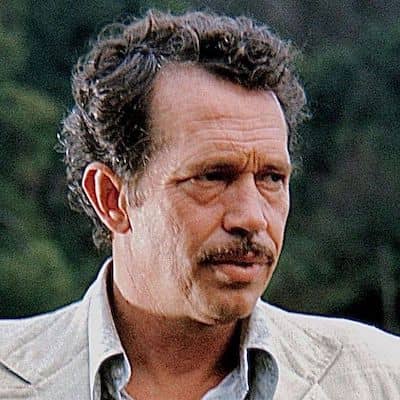 I feel most uncomfortable in a western role, because my image of the western man is John Wayne and I'm just a little shit.

I'm not angry because I'm not the leading man. Whatever they give me to do, I do. I don't want to be typed but I have learned a lesson in patience and resignation. If it's an anti-hero they want, I'm more than happy to oblige.

I believe what Camus [Albert Camus] says. When the curtain rings down, your job is done. The responsibility is pitched to someone else as to what the meaning is of what you played. What you represent is always one aspect of a moral question.

Who was Warren Oates?

Warren Oates was an actor of American nationality. Warren Oates was popular for featuring in The Wild Bunch (1969), Bring Me the Head of Alfredo Garcia (1974), In the Heat of the Night (1967), etc.

He was often seen playing violent-tempered plus prideful characters. In his honor, a documentary film titled Warren Oates: Across the Border was released in 1993.

For his acting in Two-Lane Blacktop, he received nominations for the National Society of Film Critics Award and New York Film Critics Circle Award.

This amazing actor took his last breath at the age of 53 on 03 April 1982. He died after a heart attack in his own home which is situated in Los Angeles. A funeral of his was held and his ashes were scattered at his ranch in Montana which was his wish.

His birthdate was 05 July 1928 and he was born in Depoy, Kentucky, the USA as Warren Mercer Oates. The name of his mother was Sarah Alice Mercer and his father’s identity was Bayless Earl Oates.

Further, Warren Oates’s ancestry was a mix of English-Scottish-Welsh, and had a brother Gordon. As per his academics, he went to Louisville Male High School in Louisville but never completed his studies. Later he got a high-school equivalency diploma.

After this, he wanted to finish his studies so he joined the University of Louisville.

Warren Oates had many TV shows as well as films in his bag. His first screen presence was in 1959 and since then, this actor has shown his acting skills in several projects.

Similarly, the movies he was featured in are,

By the sources of 2022, his net worth was estimated at $2 million. The yearly salary that Rutger charges are under the rug.

This actor who played the lead role in the movie in Two-Lane Blacktop as G.T.O., Warren was keeping himself away from scandals as well as rumors.

Warren Oates had a height of 5 ft 11 inches and his body weight was average. Adding some more, he had light brown eyes with dark brown-colored hair.

Paul Reiser
Tags : Actor Bring Me the Head of Alfredo Garcia In the Heat of the Night