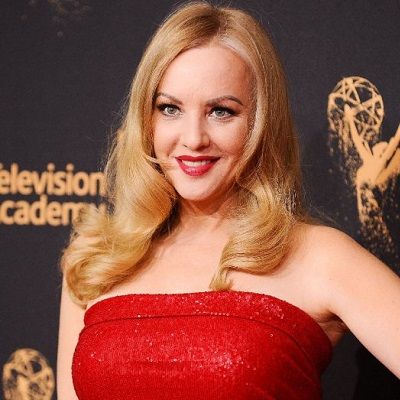 As a performer, you can't just sit around waiting for the phone to ring. You have to write and develop projects for yourself, because casting people aren't always going to see you the way you want to be seen. Write a one-person show, shoot a short film, do plays, whatever - activity breeds activity. No one's interested in a stay-at-home actress.

On young actresses and the pressure to be thin: "Well, first you have to ask yourself if you want to be the kind of actress who's interesting, or the kind of actress who's meant to play the pretty-but-uninteresting wife of a chubby guy on a network sitcom. If you want to play the good roles, spend more time in in college and in acting class than you do in the gym, and you'll have the career you want. Talent always wins out in the long run."

Wendi McLendon-Covey is a married woman. She is married to Greg Covey.

They married on 10th August 1996. Similarly, they live in Signal Hill, California. There is no other information about her previous relationship.

Who is Wendi McLendon-Covey?

Wendi Anne McLendon-Covey known as Wendy Anne McLendon is an American actress and comedian. She is famous for her comedic and improvisational roles and the character Beverly Goldberg, a family matriarch, on the ABC comedy series The Goldbergs.

He was nominated for two Critics’ Choice Television Award for Best Actress in a Comedy Series.

She was born on 10th October 1969 in Bellflower, California, US. She is the daughter of David Robert McLendon(father) and Carolyn.

Likewise, her mother is an accountant and her father is a former delivery driver for Coca-Cola.

Similarly, he has a younger sister named Shelley McLendon who is a therapist in Portland, Oregon. Likewise, her nationality is American and her ethnicity is English and Scottish.

Talking about her education, in 1987 she graduated from high school. Similarly, she attended Long Beach City College and Golden West College before enrolling at California State University.

She worked in numerous jobs after graduating high school before earning a degree from California State University in the year 2000. Similarly, after graduating, she became a member of The Groundlings, an improvisational comedy group in Los Angeles, and remained a member until the year 2009.

Likewise, Wendi McLendon-Covey began her acting career while still a member of the Groundlings. She starred in the improvisational Comedy Central series Reno 911!, as Deputy Clementine Johnson from 2003–08. Also, she also had the lead role in the Lifetime short-lived comedy Lovespring International, as well as minor roles in Bewitched and Over Her Dead Body.

From the year 2010 to 2013, she had a recurring role on CBS sitcom Rules of Engagement. Likewise, after a breakout performance in the 2011 comedy film Bridesmaids, she has appeared in a number of films.  The films include What to Expect When You’re Expecting, The Single Moms Club, Blended, Think Like a Man Too, Hello, My Name Is Doris, and many more.

She has been nominated for many awards. She is the winner of the LA Femme International Film Festival for the Comedic Actress Award and in the year 2012, she won Best Gut-Wrenching Performance.

In the year 2007, she won the US Comedy Arts Festival for Best Comedy Performance in Film.

The estimated net worth of her is around $5 million. She might earn a huge amount of money from her career but she has not disclosed her salary and incomes.

Talking about her body measurements, Wendi McLendon-Covey has a height of 5 feet 8 inches and her weight is around 61 kg. Similarly, she has blonde hair and green eyes color.

She is active on social media as she has around 181k followers on Instagram and 146k followers on Twitter. But she is not available on Facebook.