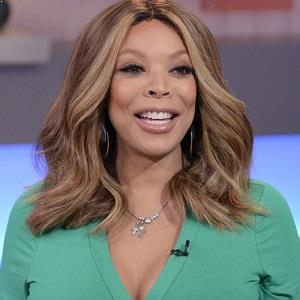 I love big hair. Big hair offsets my big body. The bigger the hair, the smaller the hips.

Wendy Williams was a married woman. She was previously involved in a relationship with American Musician Erick Sermon for a brief amount of time. she was also previously married.

Wendy then married to Kevin Hunter. The couple was dating for 4 years after getting together in 1995. They decided to tie the knot and the wedding ceremony took place on 30 November 1997.

The couple has one child from the marriage, Kevin Hunter Jr. However, this couple is now separated. They finalized their divorce in 2019.

Who is Wendy Williams?

Wendy Williams is an American television host, actress, author, fashion designer, and former radio personality. Most people know her as the host of the nationally syndicated television talk show, ‘The Wendy Williams Show’.

Wendy was born in Asbury Park, New Jersey on July 18, 1964, to parents Thomas and Shirley Williams. Furthermore, she was born as the second of three children.

She spent most of her childhood in the Wayside section of Ocean Township. Moreover, she had sharp characteristics from an early age and had contrast to her older, more bookish sister Wanda. She belongs to an African-American ethnic background and holds an American nationality.

Talking about her education, Wendy attended Ocean Township High School and graduated from there. Next, from 1982 to 1986, she attended Northeastern University in Boston, Massachusetts.

She graduated with a B.A. in communications.

Initially, Wendy Williams was a DJ for the college radio station WRBB. Next, she joined the WVIS in the United States Virgin Islands. After a year, she obtained an afternoon position at Washington DC-based station WOL.  Furthermore, she also worked overnight weekend shifts at WQHT.

Wendy has also appeared on other television shows like ‘Martin’, ‘One Life to Live’, ‘Drop Dead Diva’, ‘The Face’, ‘Aaliyah: The Princess of R&B’, ‘Death By Gossip with Wendy Williams’ and other. Some of the films that she has made appearances in are ‘Think Like a Man’, ‘The Cookout’, and ‘Mike and Dave Need Wedding Dates’ among others. Furthermore, she has also done musical theatre works.

Apart from her acting career, Wendy is also active in the business world. She partnered with the Home Shopping Network and debuted a line of dresses, pants, sweaters, and skirts fit for the everyday woman. In addition, she also sells a line of jewelry products on the home shopping network, QVC, called ‘Adorn by Wendy Williams’.

Currently, Wendy has a salary of $8,000,000 per season from her show. Her net worth totals an estimated amount of $40 million.

Wendy has been part of several controversies in her career. Her comment about Bill Cosby who attempted to get her fired in 1991 and 1992 has sparked numerous controversies over the years.

Nicole Spence sued Wendy in 2008 by filing papers with the Equal Employment Opportunity Commission. Furthermore, she claimed that Wendy’s husband demanded sex from Spence on many occasions and created a hostile work environment.

Furthermore, she has also involved herself in feuds with Blac Chyna, Beyoncé, Ariana Grande, NeNe Leakes, Holly Robinson, LeAnn Rimes, and others. In addition, her comments about Bruce Jenner were also controversial. There is a rumor floating around the internet that she might be transgender.

Talking about her boy measurement, Wendy Williams has a height of 5 feet 10 inches. In addition, she weighs 79kg. Furthermore, her body measurement is 41-30-40 inches.

Wendy is quite active on social media. She has a huge number of followers on social networking sites such as Facebook, Twitter as well as Instagram.