Wentworth Miller is an award-winning international actor and in 2007, he was listed in People Magazine's 100 Most Beautiful People in the World. Wentworth's physical orientation is not straight.

Wentworth Miller is openly gay which he publicly revealed in 2013. He wrote an open letter to the St Petersburg National Film Festival in Russia.

He is currently dating a Canadian actor and musician, Luke Macfarlane.

However, he had an alleged affair with Kristoffer Cusick.

Back in 2006, there was news of his fling with actress Mariana Klaveno at the set of Prison Break. However, they later said that they are just good friends. Additionally, his name was also linked up with Amie Bice. 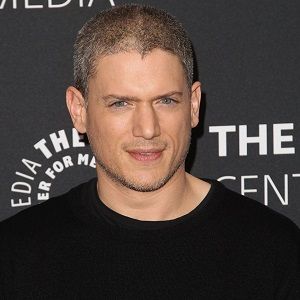 You have to love what you do, and you have to need it like you need air. And there's nothing else that would give me the same degree of satisfaction as acting, which is why I can't walk away from it.

Confidence is at the root of so many attractive qualities - a sense of humor, a sense of style, a willingness to be who you are no matter what anyone else might think or say.

You only cry for help if you believe there is help to cry for.

Who is Wentworth Miller?

Wentworth Miller is a British-American actor as well as a model. He rose to prominence after appearing as Michael Scofield in the Fox series Prison Break. For his role, he also got a Golden Globe Award nomination for Best Actor in a Leading Role category.

Furthermore, he has also won a Saturn Award as the Best Guest Starring Role on Television for “The Flash”. He has also appeared in a couple of hit movies including Blood Creek, Stealth, and Romeo and Juliet.

Currently, Miller is an advocate for mental health.

Talking about his nationality, he is British-American and his ethnicity is mixed (Afro-Jamaican, African-American, Lebanese, German, Jewish).

He is the son of Joy Marie Palm-Miller, mother, and Wentworth Earl Miller II, father. Her mother was a special education teacher and her father was a lawyer educator as well as an assistant district attorney.

Moreover, he grew up in Park Slope, Brooklyn, New York along with his siblings Gillian Miller and Leigh Miller. One of his sisters, Gillian is doing a Ph.D. in Massachusetts and Leigh is in law school in Virginia.

Moving towards his education, he completed his graduation in 1990 from Princeton University earning a bachelor’s degree in English literature.

Wentworth began his acting career in 1998 when he first appeared as Gage Petronzi in the television series Buffy the Vampire Slayer.

A year later, he got the role of Nelson in the TV series ‘Time of Your Life’. He came into the spotlight as he landed the role of Michael Scofield in the Fox series Prison Break.

Furthermore, he portrayed the role of a caring brother who created an elaborate scheme to help his brother Dominic Purcell.

For his role, he also got a Golden Globe Award nomination for Best Actor in a Leading Role. Some of his other popular roles include Sgt. Paul Adams in Ghost Whisperer, Detective Nate Kendall in Law & Order: Special Victims Unit, and as a guest role in The Flash.

Besides acting, the Prison Break star has also starred in a couple of music videos It’s Like That and We Belong Together. Additionally, he has also appeared in a couple of hit movies including ‘Blood Creek’, ‘Stealth’, ‘Romeo and Juliet’, and ‘Resident Evil: Afterlife’.

As of now, Wentworth has won a Saturn Award as the Best Guest Starring Role on Television for “The Flash”. For his role in Prison Break, he also got a Golden Globe Award nomination as well as Teen Choice Award, Black Reel Award, and a few more.

Being a famous actor, he earns a healthy amount of money from his profession. Currently, he has a net worth of $4 million.

Wentworth Miller is homosexual. However, his name has been linked with a couple of girls as well as with men. There was a rumor of his relationship with actor Kristoffer Cusick.

Wentworth has a height of 6 feet 1 inch and weighs 77 kg. Moreover, he has a pair of attractive blue eyes and grey hair. Additionally, his other body measurements include 40 inches chest, 15 inches biceps, and 33 inches waist.

Wentworth is not active on social media at all. As of now, he doesn’t hold any of these social accounts such as Instagram, Facebook, and Twitter.