Wes Chatham is renowned as an American actor. He rose to fame after appearing in The Hunger Games. 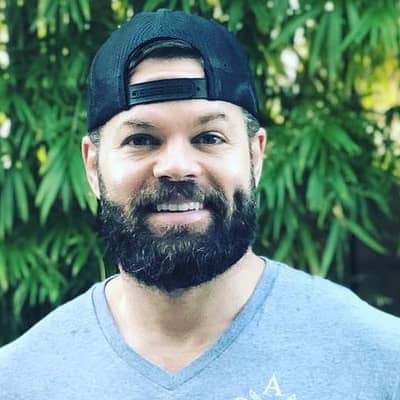 When did Wes Chatham marry?

Chatham married his longtime girlfriend on the 7th of April in 2012 in Barnsley Gardens Resort which is located in Adairsville.

The couple together has two sons. On November 24, 2014, the pair welcomed their first son named John Nash Chatham.

Similarly, their second son named Rhett Jameson Chatham was born on June 1, 2016. Further, there is information available regarding his past love life.

Who is Wes Chatham?

Wes Chatham is renowned as an American actor. He rose to fame after appearing in The Hunger Games: Mocking Jay Part 1 and Part 2 where he was cast in the character of Castor.

Wes’s birth name is John Wesley Chatham. He was born on October 11, 1978, in, Atlanta, Georgia, United States. He holds an American nationality and belongs to mixed ethnicity of English and German.

Chatham grew up in North Georgia with his two siblings. When he was two years old, his parents get separated then he spent most of his childhood with his mother and siblings.

At the age of five, he was offered to act for the first time in a commercial for the laundry detergent company, Tide. Afterward, he did not venture into acting.

At the age of thirteen, he moved in with his father where he grew to be an unruly and rebellious teenager. His mischievous behavior caused him to be kicked out of his high school.

Then, he enrolled at the Give Center School in Lawrenceville, GA. A school of a second chance for troubled youth, offering very small classes and a higher standard of education than public school.

After graduation, Wes joined the U.S. Navy. He served four years in the military career where he worked as an aviation firefighter on the flight deck of the USS Essex.

Wes was discovered by casting director Robi Reed while searching for some authentic military guys for the movie. He made his debut in 2003 through the film, The Fighting Temptations where he was cast in the role of Cashier.

He made his career big break after Paul Haggis cast him as Corporal Steve Penning in In the Valley of Elah alongside Tommy Lee Jones. In 2013, he also starred in the web series called Armed Response where he portrayed the role of Blake Morgan.

Lately, he made features in the 2020 action-thriller film, Tenet where he was cast in the role of Sammy.

Some of his notable film and television series are mentioned below in the table,

To date, Chatham has managed to maintain his clean image. He hasn’t been part of any sorts of rumors and disputes that create headlines in the media.

As per other online sources, Wes has an estimated net worth of around $1 million. Being an actor is the main source of his wealth.

However, his other assets, yearly income, and real estate are still under review.

The actor has athletic body physics and he stands at a height of 5 feet 11 inches tall. His weight is around 69 kg.

He has brown hair color with blue pair of eyes. Further, there is not much information available regarding his other body physics.

He is also active on Instagram under the username @officalweschatham where he has nearly 83k followers.