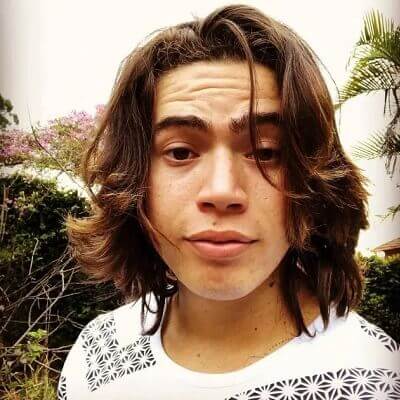 Whindersson Nunes is a married man. The Youtuber exchanged wedding vows with Luisa Sonza on 28 February 2018. The religious ceremony took place in a Catholic chapel with sea view, in Alagoas, Brazil in the presence of close friends and family. His wife is also a Youtuber and singer. She has around 4.7 million subscribers on her channel. She usually uploads videos featuring her husband and also her own music videos.

Previously, he used to date Camilla Uckers. She is also a Youtuber and has more than a million subscribers on her channel.

Whindersson Nunes is a Brazilian Youtuber, comedian, and singer. With over 38 million subscribers, his channel, ‘whinderssonnunes’ is one of the most subscribed channels on Youtube.

Whindersson Nunes was born as Whindersson Nunes Batista on January 5, 1995, in Palmeira do Piauí, Brazil. As of 2020, his age is 25. He was born to parents Hidelbrando Sousa Batista(father) and Valdenice Nunes(mother). He does not have any siblings.

Nunes spent his childhood days in Bom Jesus, Piaui. At the age of 15, he had already decided that he wanted to be a Youtuber and also attempted several times to get recognition but failed initially.

His ethnicity is Brazilian.

He has not revealed anything about his educational background. There is no information about which school or college he attended.

Whindersson Nunes has an estimated net worth of around $5.5 million. According to some online sources, he earns around $78k-$1.2 million per year. His main source of income is Youtube, performing stand-up comedy shows, selling merchandise, etc.

Nunes started making videos on Youtube from an early age. He was not getting much recognition but the parody video, ‘Alô vó, tô reprovado’ which he released in 2012 became viral. The video received five million views within a week. This skyrocketed his popularity and he started gaining a lot of views on his videos. Unfortunately, on 20 January 2013, his channel was hacked. This forced him to create a new channel on 21 January 2013, ‘whinderssonnunes’.

>His contents include parodies, songwriting, vlogs, movie reviews, etc. His videos have very simple editing with cuts being the only form of editing. It also includes scenery and costumes used by Nunes who is, in most videos, shirtless in a messy room.

His most popular video to date is ‘WHINDERSSON NUNES em PROPAROXÍTONA (SHOW COMPLETO)’. The video is his stand-up comedy performance and is more than an hour long. The video has over 76 million views. His second most popular videos include ‘QUAL E A SENHA DO WIFI- Parodia Adele- Hello’. The parody song of Adele’s super hit song has acquired more than 74 million views. His other video, ‘WHINDERSSON NUNES in MARMININO (COMPLETE SHOW)’ is another popular stand-up comedy video and has gained more than 71 million views.

As of April 2020, his channel has more than 39.2 million subscribers and his total video views have crossed 3.3 billion.

Nunes has not been involved in any controversies. He has been able to keep himself away from any type of scandal and controversy so far. So far, he has not done anything controversial in his career. He is one of the funniest YouTubers in the world and people love his jokes and sense of humor. Similarly, there are no rumors about him of any kind.

Whindersson Nunes stands at a height of around 5 feet 9 inches. He has a weight of 78 kg. His hair color is dark brown but he likes dying his hair blonde.

You may also like to read the Bio, Career, Net Worth, Body Measurements, Social Media, Relationships, and more about Pewdiepie, Markiplier, Jostasy, and more.