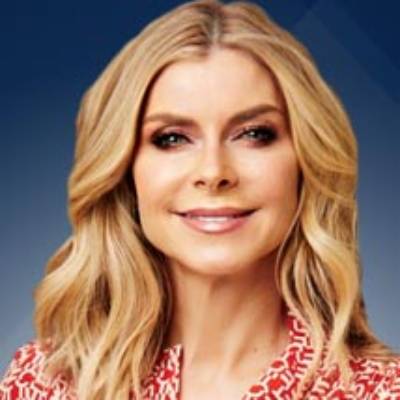 The American journalist, Whitney is in a married relationship with Navdeep S. Sooch. Sooch is an established and renowned businessman and is the Chairman of the Texas-based company, Silicon Labs.

The couple married on 27 August 2010 and is happily living together. Casey has never mentioned their child till now in the public.

Previously, Whitney was in a married relationship with Jason Sehorn. Jason is a well-named American football cornerback and is popular for being a past professional football player for New York Giants in National Football League(NFL).

The couple married on 14 February 1998. However, they did not have a sound relationship with each other and ended up their relationship on 4 August 1999.

Also, there have been rumors that Casey was dating Rocco DiSpirito, Lance Armstrong, and Adam Duritz.

Who is Whitney Casey?

Whitney Casey is a well-recognized American journalist, news manager, as well as former anchor. Casey is widely famed for being one of the youngest anchors and journalists on CNN Headline News during the late 90s and early 00s.

Also, she is renowned for her short-term marriage to Jason Sehorn.

Whitney Casey was born on 9 October 1974. At present, her age is 46 years old. Likewise, her birthplace is the United States of America.

Whitney is the daughter of her father, Charlie Casey whereas her mother’s detail is still unknown. Moreover, she has a sister as well. Her dad, Charlie is a well-known footballer, and he played for Atlanta Falcons.

Talking about her nationality, Casey holds an American identity whereas her ethnicity is Caucasian.

At the beginning of her career, Whitney Casey started working in television journalism at a Fox affiliate after completion of her graduate degree. Afterward, Whitney worked for CBS in New York and NBC in Miami as well. She began serving for CNN and there she covered some of the major stories of the decade.

Furthermore, Casey also served at ABC News in New York being an anchor and there she produced, read newsbreaks, and anchored “Politics Live”.

Presently, Whitney is the author of books suggesting relationship advice, offers video advice on Match.com, and anchor and senior producer of “Great Day Houston”, a live talk show that features every day on KHOU the CBS affiliate in Houston, Texas.

Casey is believed to earn a beautiful salary from her profession. She has been actively working in her field for a long time.

It is reported that Whitney Casey has an estimated net worth of $1 million.

However, the popular figure has not disclosed her exact salary, earnings, and assets details till now.

One of the popular journalists, Whitney Casey has never been part of any controversial matter or rumors till now.

It seems that she favors enjoying her personal life and does not want to merge it with her professional life.

Active reporter, Whitney Casey has a beautiful look and amazing personality as well. She stands at a height of 6 feet.

She has blue eyes whereas her hair is blonde.

About her social media presence, Whitney Casey is an active personality on social media. Whitney has more than 4.7k followers on her official Instagram account @whitneycasey007.