Whitney Cummings is an American comedian, actress, and producer who is well known for starring in Whitney’, creating ‘2 Broke Girls’ and writing, producing the revival of ‘Roseanne’. She is in a relationship with Miles Skinner. 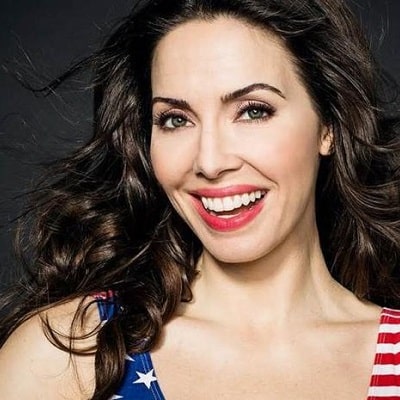 We're socially constructed to hide our flaws, and that breeds pain for a lot of people.

I'm kind of emotionally dyslexic, and when I feel vulnerable or nervous, I laugh.

Whitney Cummings is engaged with her long term boyfriend

Whitney Cummings is currently in a relationship.

She is engaged to her longtime boyfriend Miles Skinner.

Her boyfriend proposed to her 0n 4 September 2018 on her birthday in front of her rescue horse, King.

They met for the first time on a dating app. I Hope, they will soon tie their knot.

Previously, she dated Peter Berg from 2012 to 2013. After that, she was in a relationship with National Football League player Kerry Rhodes in 2014.

Who is Whitney Cummings?

Whitney Cummings is an American comedian, actress, and producer who is well known for starring in Whitney’, creating ‘2 Broke Girls’ and writing, and producing the revival of ‘Roseanne’.

She was born to her mother Patti Cummings, a former public relations director at Neiman Marcus, and her father Vince Cummings.

When she was 5 years old, her parents got divorced.

She has an older sister Ashley Cummings and an older half-brother, Kevin Cummings.

Whitney holds American citizenship but her ethnicity is a mix of Scottish and English.

She attended St. Andrew’s Episcopal School and graduated in 2000.

She did her internship at WRC-TV where she was a multi-media journalist. She made her way to Los Angeles after graduation and worked on Punk’d on MTV (2004) and EMR (2004).

Cummings performed stand-up in the same year and in 2007 Variety named Cummings one of 10 Comics to Watch.

After that, she performed on ‘Tonight Show with Conan O’Brien’ and ‘Last Call with Carson Daly’.

Also, she was one of the head writers, an executive producer, and an overseer of the revival of ‘Roseanne’.

She was named one of Variety’s Top Ten Comics to Watch in 2007. Apart from that, she has not been awarded or nominated for her work.

As per 2022’s data, she has an estimated net worth of around $30 million and she has earned that sum of money from her professional career.

Her salary is around $60k per year as a salary.

There were rumors that she may have had some surgery done in order to enhance her looks and also she might have some work done, including eyelid surgery, facial filters, a nose job, as well as a facelift.

However, she revealed that the rumors were false when she appeared on The Today Show.

She has green eyes and dark brown hair. Her shoe size is 10(US).