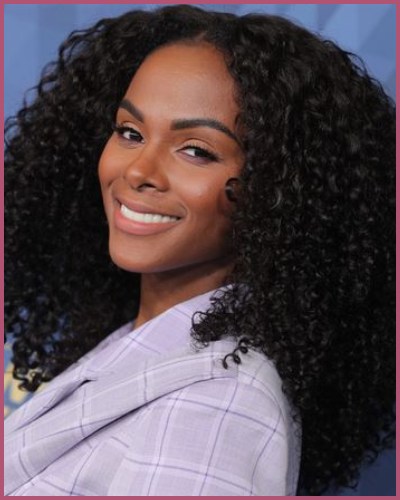 Tika Sumpter who played Layla Williamson in the ABC daytime soap opera, One Life to Live is married!

The actress took over to announce their marriage journey through Instagram writing,

“I got to marry my best friend yesterday. My heart is so full. Friends and family are everything. All involved made a girl’s dream come true. Excited to have @brides feature our story.”

All about Tika Sumpter’s Wedding with Nicholas James

The wedding of American actor Nicholas James happened to his baby mother Tika Sumpter at Chileno Bay Resorts and Residences. It was an intimate destination wedding and at the same time, they wanted to give vacation experiences to the guest, Brides reports.

About the whole venue and wedding plan, Tika confirms,

“I didn’t necessarily always want a destination wedding. It was just something that came to my mind. One of our first trips out of the country was Anguilla, and Mexico definitely has that beautiful, island vibe, so we were like why not do it in Cabo?”

Mrs. James wore a strapless Galia Lahav wedding dress and a flowering veil while exchanging her vows. Similarly, she wore shoes by Badgley Mischka. The groom of Tika Sumpter was styled in a pale blue tuxedo designed by Franc Milton.

Also, Read Fred Sirieix talks about his plans for a destination wedding in Jamaica!

Who is Tika Sumpter?

Tika Sumpter is an American actress who played young Michelle Obama in the NAACP Image Award-nominated 2016 biopic film Southside With You. Sumpter is also a singer, producer, television host, and model.

The actress has featured in television series like Law & Order: Special Victims Unit (2006), Being Mary Jane (2013), and Gossip Girl (2011). Her feature films include What’s Your Number, Sparkle, and My Man Is a Loser.

Likewise, Tika Sumpter won Philadelphia Film Festival Award for Best Feature Film for the 2019 film The Nomads where she is both producer and actress. Read more bio…

Who is Nicholas James?

Nicholas James is an American actor and model who portrayed Officer Justin Lewis in the television series The Haves and the Have Nots (2016–2021). His credited films are Chaser, Genre This, Chinese Takeout, and others.

Moreover, he got spotlighted for appearing in the film Prom Night (2008) as Denny Harper and Navy Luitent in  NCIS: New Orleans (2014).

Nicholas James is the husband of actress Tika Sumpter the two started dating in 2016.  James shares a 5-year-old daughter Ella-Loren with his wife who he is engaged for four years now.

Tika Sumpter fell in love since she met James on the set featuring Justin Lewis on season three of Tyler Perry’s 2013 series The Haves and the Have Nots. Eventually, James and Sumpter kept their relationship private for 2 years even when they were pregnant with Baby Ella- Loren.

Tags : American actor and actress Destination wedding at Mexico The Haves and the Have Nots