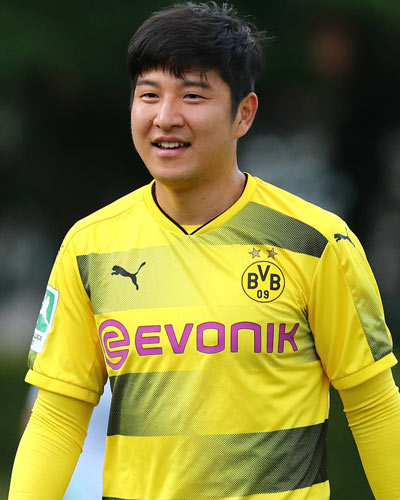 Park Joo-Ho plays for the Ulsan Hyundai FC and is a defender on the football team. This 5 feet and 9 inches tall professional player was captain of the South Korea National Under-20 soccer team at the 2007 World Cup held in Canada.

But what is more adorable is his family which consists of his beautiful wife, an adorable daughter, and a son!

Park Joo-Ho is a married man. He met his Swiss wife Anna when he was a member of FC Basel from 2011 to 2013. Talking about the time, Park Joo-Ho had said:

“Anna was a part-time worker at the cafe inside of the soccer stadium. I first met her on the plane and ran into her again. We both thought, ‘Oh?’ and we became friends. One day, Anna asked me if we were just friends or if I thought of her as a potential girlfriend. It made me think about our relationship and we started dating. After many twists and turns, Na Eun was suddenly created.”

Na Eun is their daughter and she was born in 2015. Her present age is 7 years. Park and Anna also have a younger son who was born in 2017 and his name is Geon Hoo. They are a happy family and Park is a very supportive and loving husband and father.

Footballer Park Joo-Ho and his family were on the show on KBS2 TV called The Return of Superman in August 2018. Park Joo-Ho revealed the reason that he decided to come on the show.

“Anna got married to me at the young age of 23 and lived in a foreign country alone [without friends and family], so it was probably hard for her. I want to give my wife a break.”

Park and Anna’s daughter Na Eun was also on the show and she stole the heart of the audience with her cuteness and knowledge. She is a brilliant child and knows four languages-English, Spanish, German, and Korean.

Na Eun is also extremely friendly and social. She interacted with the cameraman of the show and her younger brother and it was great to see her do that.

You may like to read Football player Chauncey Carter participating in a weekend tournament in Greensboro, North Carolina to raise awareness about Sarcoidosis, breast cancer, and mental health!

Park Joo-Ho and his career

Park Joo-Ho plays football at a professional level. He was born in Seoul on 16 January 1987. He began first to play at the J2 League for Mito HollyHock.

After one year, he joined J1 League and played for Kashima Antlers. In 2009, he and his team won the championship title. He then took a transfer to Jubilo Iwata.

In 2011, he joined FC Basel and was with them until 2013 when he won several titles and championships. Additionally, Park also played for Mainz 05, Borussia Dortmund before joining Ulsan Hyundai FC in December 2017.

Park Joo-Ho and his international career

Also read The late Bobby Dodd, college football coach is remembered lovingly by his fans, team players, and his children-Linda and Bobby Jr.!

Park Joo-ho is a renowned South Korean footballer. He is the defender for Uslan Hyundai FC. He also played as a captain for the South Korea national under-20 soccer team in the 2007 FIFA U-20 World Cup. More Bio…