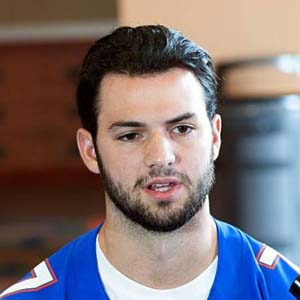 Facts of Will Grier

Having a kid is hard to explain, but when you talk to another parent, you have mutual understanding of what that does to you as a person

After everything that's happened, I'm sitting here in my last year of college football. I'm just happy. I'm in a good spot.

Relationship Statistics of Will Grier

Will Grier is married to Jeanne O’Neil since 2014 and in 2016 they had a baby-girl, Eloise Marie Grier.

Previously, he dated Taylor Walker and broke up in 2014.

Who is Will Grier?

American Will Grier is Mr. Football USA. He is a football quarterback for the team named Carolina Panthers.

He was born on April 3, 1995, in North Carolina, USA. His parents are Chad Grier Elizabeth Grier-Floyd and they are of Scottish-Irish ancestry.

His father coaches football and was a standout quarterback for the East Carolina Pirates.

He graduated from Davidson Day School in North Carolina, US.

Will Grier’s started his career when he was at school. He held the national record of 837 yards in a game. At the senior level, he had nation-leading 4,989 passing yards, and North Carolina record 77 touchdowns.

He played the quarterback at the University of Florida after he was offered scholarships to play football at Auburn, Arkansas, Florida, North Carolina, Tennessee, and Wake Forest.

He competed with Treon Harris to be Jeff Driskel’s backup as a freshman in 2014 and retouched freshman in 2015. In the Gators 28–27 comeback victory Will was the main player.

However, in October 2015, Will was suspended for a year when it was revealed that he had tested positive for performance-enhancing drugs.

Will was the finalist for the Heisman Trophy in 2018 and also All-American.

Will was ranked as the second-best dual-threat quarterback in his class and 46th player overall by Rivals.com.

In addition, sponsorship and endorsements amount to $78,431 US.

Will Grier has auburn hair and brown eyes. His height is 6 feet 2 inches and weighs 97kg.