Posted on December 5, 2021 | In Dating , Married , Relationship
Share this 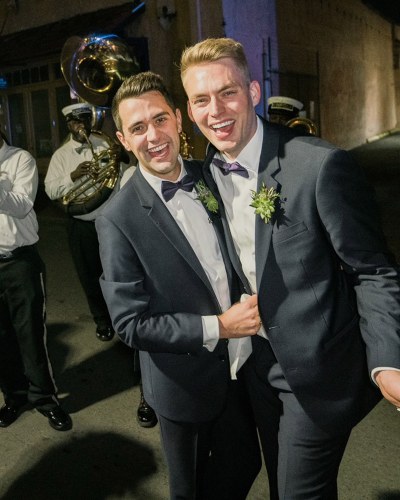 Will Jardell and James Wallington are now a married couple! On 3rd December, Will and James walked down the aisle exactly three years after Will proposed to James on screen when they won the CBS competition series.

They had to postpone the wedding multiple times due to the COVID-19 pandemic. Pandemic became an important component in their wedding planning as they followed the rule that all the guests had to be vaccinated or show a negative test in order to attend.

Likewise, they married at the New Orleans Athletic Club surrounded by 200 guests. They had King Cake at their wedding as they did King Cakes on the final leg of the Amazing Race.

At the wedding, the couple wore purple chosen by the grooms-women with the help of a sustainable bridesmaid dress from brand Dear Cleo.

“Now that the moment is over, we can breathe, we can celebrate, we wipe all the joyful tears and start our new lives as husbands! We are overjoyed and feel so incredibly loved. We couldn’t be happier.”

Relationship of Will Jardell and James Wallington

Jardell revealed before the wedding that he was excited for everyone that he loves and those who have impacted in my life to be in the same space. He added,

“It’s exciting and overwhelming … just so much emotion,” said Wallington. “It’s been a long time coming.”

The couple first met each other in the year 2014 when James was working on America’s Next Top Model. He knew from the start that there will be a special bond between them. Will knew from the starting of the show that he was going to propose to James but James had no idea about the proposal.

Their proposal was made them the first LGBTQ couple to get engaged on the show which James Wallington said inspired him. They received a strong and positive response from other community members.

Short bio on Will Jardell

Will Jardell is an actor, dancer, model, and reality television personality from Nederland, Texas. He was the runner-up of the 2014 American’s Next Top Model Cycle 21. Read more bio…