William Dafoe is an actor who portrayed dark and unconventional characters in his films.

Moving towards his personal life, he has relationship status ups and downs and highs and lows but he has managed well to overcome those difficult times in his life.

He was dating his girlfriend Elizabeth LeCompte before the couple decided to convert their alleged affair into a marital relationship and got married. The couple tied the knot in the year 1977 and started living as husband and wife. They have a son, Jack Dafoe.

Sadly it was not meant to be and because of some serious problems, the couple parted their ways. They went through the process of divorce in the year 2004 and ended their relationship on a sad note.

Then he moved on with his life and started dating Giada Colagrande. The couple got married on 5th March 2005 and till now they are going very strong. He is not gay as he has a son from his first wife. He might have plans to have more children in near future. 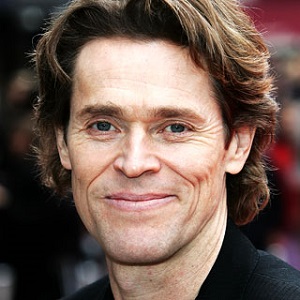 I think on some level, you do your best things when you're a little off-balance, a little scared. You've got to work from mystery, from wonder, from not knowing

With theatre, you have to be ready for anything.

Who is Willem Dafoe?

William Dafoe is an American film and voice actor who portrayed dark and unconventional characters in his films.

He is well-known for the role of Norman Osborn and the Green Goblin in the 2002 film Spider-Man earned him an MTV Movie Award nomination for Best Villain.

He was born on 22 July 1955, in Appleton, Wisconsin, USA. Dafoe’s nationality is American and his ethnicity is mixed(German, English, Irish, Northern Irish, Scottish, and French).

His mother’s name is Muriel Isabel Dafoe and his father’s name is William Alfred Dafoe. His father was a surgeon by profession. Before making his acting debut, Dafoe toured with an avant-garde theater group across the USA and Europe.

Although, he has five sisters and one brother. He was raised by his sisters as his parents were busy with their professions.

After studying at Appleton East High School, he enrolled at the University of Wisconsin in Milwaukee to study drama when he was 17 but soon grew tired of the university’s theater department. Hence, he left the university and joined the experimental theater company ‘Theatre X’ in Milwaukee

During his career, Dafoe made his debut on-screen acting with a small part in the 1980’s Heaven’s Gate. In addition, he took on the role of Sergeant Elias in Platoon in 1986 for which he was nominated for an Oscar. Roles in Martin Scorsese’s The Last Temptation Of Christ in 1988, Mississippi Burning in 1988, and Born On The Fourth Of July in 1989.

He strengthened his position as one of the strongest character actors in Hollywood. Furthermore, Willem Dafoe is notable for movies including Tom and Viv in 1994, The English Patient in 1996, Speed 2 in 1997, Spider-Man in 2002, Animal Factory in 2003, and Manderlay in 2005.

He was awarded the “Special Award: For immense contribution to the art of film” in 2002. The International Film Festival of the Art of Cinematography Plus Camerimage which is a festival dedicated to cinematography. Furthermore, Dafoe lent his voice for the animation Finding Nemo in 2003 and co-starred in Mr. Bean’s Holiday in 2007.

Likewise, he won the Stockholm Achievement Award in 2012 presented at The Stockholm International Film Festival, Sweden.

Willem Dafoe: Salary and Net Worth

There are no rumors of the couple getting separated by now. But his bio is stronger in the aspect of a career rather than his personal life.

Willem Dafoe has a height of 5 feet 10 inches. His body weighs 78kg. He has dark brown hair and blue eyes.

Also get to know more about the birth facts, education, career, net worth, rumors, height, and social media of different personalities like Jadon Sand, Andrew Caldwell, and Ron Bottitta(Actor).