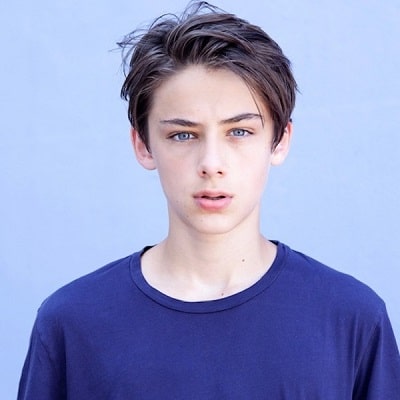 Also, he has not been linked with any other celebrities. He is currently busy in his career rather than being in a relationship.

William Franklyn-Miller is a young British model and an actor. He is best known for portraying the character of Giovanni de Medici in the historical TV drama series “Medici”.

He was raised alongside his two younger siblings – a brother named Noah and a sister named Siena. William holds British citizenship but his ethnicity is unknown.

Talking about William’s education history, he is online homeschooled in order to focus on acting and modeling.

William Franklyn-Miller started his modeling career at the age of 4 and became successful in catching the eye of a modeling agent. He signed a contract with London’s Bruce and Brown modeling agency. Later, he was hired for a promotional campaign for Next.

Later, Bayside Modeling Agency approached him and since then, he has worked with popular brands like marks & Spencer, Harrods, SUDO and RatBag, and many more.

Moreover, he has been featured in numerous fashion magazines such as Vogue Russia, Vogue Italia, La Petite Magazine, and Hooligans Magazine, etc.

William Franklyn-Miller is also a successful actor. He made his appearance in a short movie titled ‘A Fish Out of Water’. In 2016, his photo was posted on  Twitter by a  Japanese schoolgirl and he went viral.

It seems William has not been awarded and nominated for his work to date.

As per the sources, he has an estimated net worth of around $400k and he has earned that sum of money from his professional career. Also, he earns around $8k per episode.

William has been successful in keeping himself far from rumors and controversies in his personal and professional life.

William Franklyn-Miller has a height of 5 ft. 3 inches and weighs 60 kg. Also, he has blue eyes and brown hair. His shoe size, dress size, etc. are not available.

To know more about Alan Davies, Billie Eilish, and Jenna Bans, please click on the link.