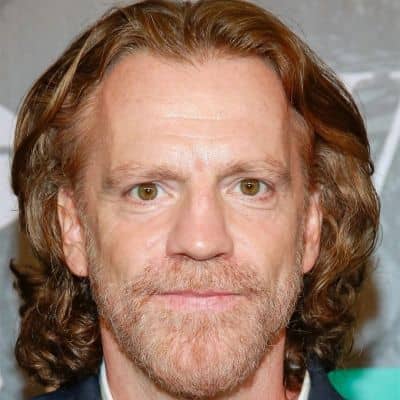 William Houston is currently assumed to be single. There are no past or present relationship rumors, gossip, or any kind of linkup of him yet. He wants to keep his personal life private and uptight.

Who is William Houston?

As a voice actor, he voiced the character of King Aldrich, The Core, in the 2022 series, Amphibia and also in Horizon Forbidden West.

Also, he has played the role of Joseph Crackstone, in the supernatural comedy series, Wednesday.

The accomplished actor William Houston was born on July 19, 1968, in Sussex, England, the United Kingdom. As of 2022, he is 54 years old and holds British nationality.

Similarly, his ethnicity is English and according to the astrologers, his birth sign is Cancer.

There is no further info about his parents and siblings.

Adding more, he was trained at the Central School of Speech and Drama.

As a stage actor, he has performed in Troilus and Cressida, Henry IV, Sejanus, Coriolanus, and Euripides’ Bachhai. In January 2014, he substituted Iain Glen in the main role in Fortune’s Fool at the Old Vic.

He played, in Cause and Effect, in the second episode of the third series of Robin Hood, in April 2009. In the same year, he appeared as Dr. Millias Culpin in the BBC series, Casualty 1909 and 1907.

Similarly, in the year 2009, he executed the role of Constable Clark’ in the film, Sherlock Holmes, sharing the screen with Robert Downey Jr. and Jude Law. It was directed by Guy Ritchie and later he repeated the following role in the 2011 sequel, Sherlock Holmes: A Game of Shadows.

As a voice actor, he voiced Marvellous Chester in Dark Souls (2011), Dark Souls 2 (2014), and Scholar of the First Sin. Moreover, he voiced the character of retired Hunter Djura and the Gatekeeper in 2015 in Bloodborne.

Afterward, in 2020, he was cast as Ted Daszkiewicz in the BBC drama, The Salisbury Poisonings.

In 2022, William Houston has been cast as Joseph Crackstone, in the American horror series, Wednesday. It is set to release on Netflix on November 23, 2022.

Furthermore, he can be seen voicing the characters in the 2020 animated series, Amphibia and the video game, Horizon Forbidden West.

As of 2022, the accomplished actor, William has an estimated net worth of around  $1.5 Million. However, his exact salary and incomes are not available at the moment.

The star cast of the 2022 series, Wednesday, is keeping himself away from rumors or controversies. He is able to maintain a clean profile in the media.

The handsome actor, William stands at the height of 6 feet while his weight is unknown. His facial appearance includes a pair of light brown eyes and hair of the same color as well.

Meanwhile, he has a fair complexion, but his body measurements like chest, waist, and hips sizes are not available at the moment.

It seems likes, he wants to keep his personal life away from the media and limelight.

Click to read more about other actors like Ralph Attanasia, Taylor Misiak, Messiah Ya Majesty Harris, and Asia Kate Dallion.