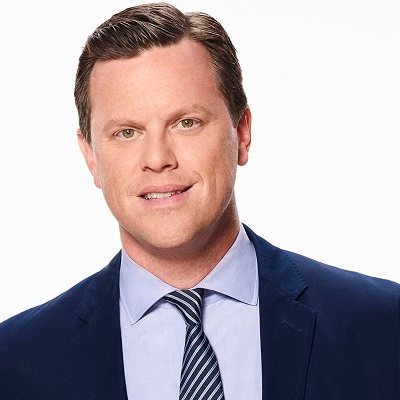 It's not about being new to the presidency, you'd have to be new to humanity to know not to say something like that. Not just to a woman, to another human being, and especially when you're the most famous person now on the face of the Earth, and most powerful.

Willie Geist is happily married to Christina Sharkey. He met Christina at the middle school. Since then, they were in love with each other.

Eventually, after dating for a very long period they exchanged vows on the 24th of May 2003 in Humacao, Puerto Rico.

Who is Willie Geist?

American Willie Geist is a TV personality and Journalist. He is renowned as the co-anchor of MSNBC’s Morning Joe and anchor of Sunday Today with Willie Geist.

Also, he is an author and producer.

Willie Geist was born on the 3rd of May 1975 in Evanston, Illinois. His birth name is William Russell Geist. He is of Germanic ethnicity.

He happens to the eldest child of Bill and Jody Geist (mother). His father, Bill is a retired author and columnist. He has a younger sister, Libby Geist. Libby is a documentary film producer at ESPN. Their great-grandfather, Herbie Lewis was the Hockey Hall of Fame inducted hockey player.

Talking about his educational background, he attended George Washington Middle School in Ridgewood. Later, he completed his High School education from Ridgewood High School. During High schooldays, he used to play basketball and football as a quarterback.

Later, he joined Vanderbilt University. At the University, he used to be a member of the Tennessee Alpha chapter of Phi Delta Theta. During college days, he used to work as the editor of the college newspaper, Vanderbilt Hustler.

Willie Geist started his career with CNN Sports as an editor and producer. Later, he became the field producer and reporter for the channel. At the time, he used to cover Super Bowl, NCAA Final Tours, and The Masters.

Moving forward, in late 2007, he joined the MSNBC as the co-host for the morning time slot, 6-9 a.m. In September 2007, he became the co-host of the NBC News’ morning news and talk show, Morning Joe.

Later, in July 2009, he hosted the weekend morning show, Way Too Early with Willie Geist. The following year, he became the hots of the TV series, Today replacing Matt Lauer. The same year, he published the humor book, American Freak Show.

In 2012, he co-anchored the shows including Watch What Happens, Way Too Early and Rock Center with Brian Williams. Moving forward, in 2014, he launched his book, Good Talk, Dad along with his father that became The New York Times Bestseller co-authored with his father, Bill.

Currently, he is associated with NBC’s shows; Morning Joe, Today Show, and Sunday Today with Willie Geist as the co-anchor and news correspondent.

As of 2020, he has an estimated net worth of $12 million. As a TV personality of NBC, his earnings are in the range of $5 million per year.

Besides that, he also makes through his production works and royalties of his books.

Willie Geist has brown eyes with brunette hair. He stands at a height of 6 feet 4 inches and weighs around 78 kg.

Till the date, he has not been part of any sort of controversy and scandals that created headlines in the media. Besides that, he has managed to maintain a distance from any type of rumors too.

You may also read the bio of Julius Cowdrey, Joe Gorga, and Tim Hasselbeck.