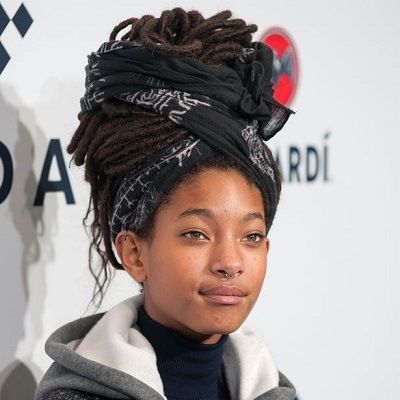 I have the motto that says, 'Whatever you see in your closet that you like, pick it and wear it.' It's not just your closet, but just your life. Whatever catches your eye. Pick it.

I feel like I'm making a difference. I feel like putting out a message for young girls to follow your dreams and just work at what you want to do and be yourself. I think that's a really good message that you need to put out there.

When I first got into the entertainment industry, I would always watch Rihanna and all those people, so I was like, 'Ooh, I have to be this.' So my mom was like, 'Just be yourself.'

I never really get to go to school because I am always on tour or with my father. There is a tutor most of the time, but usually I am working so I never get to do the lessons. The worst thing about maths is all the kids are ahead of me because they go to school.

Willow Smith is currently in a relationship. She is dating Tyler Cole since April 2018. Cole is also a musician. The couple is often seen together in public, holidaying, and having the best time of their life.

She likes eating cheese every day. Willow dresses up the way she wants, mostly seen dressed like a tomboy.

If she desires to don a pair of Converse with a pencil stuck through them, she will definitely do that!

Who is Willow Smith?

Willow Smith is an American singer, a songwriter, record producer, and actress. She is the daughter of a famous actor-musician, Will Smith.

She made her debut in her father’s super hit film ‘I Am Legend’.

Recently, she won a Young Artist Award for her performance.

Willow Smith was born as Willow Camille Reign Smith on October 31, 2000, in Los Angeles, California, the United States. She is a Scorpio.

Her father is Will Smith, who is an actor-musician and mother, Jada Pinkett Smith, an actress-musician. They belong to the African-American- Creole-Barbadian-Jamaican ancestry.

She has two siblings, Jaden Smith an American rapper, and Trey Smith an actor. Her brothers are youth ambassadors for Project Zambi, which, in conjunction with Hasbro, provides assistance for Zambian children orphaned by AIDS.

She subsequently went to Sierra Canyon School in Chatsworth, California.

Willow Smith’s acting debut in the movie “I Am Legend” alongside her father, Will Smith. Her next film, Kit Kittredge: An American Girl, was released on July 2, 2008.

Willow voiced the character of young Gloria in Madagascar: Escape 2 Africa, alongside her mother as older Gloria in the year 2008.

Smith moved to television for a guest role in the Nickelodeon series ‘True Jackson, VP’. She found it easy as television made it possible to do work and have fun both at the same time.

She released her first R&B single ‘Whip My Hair’, which went platinum in the US and peaked at number 11 in the US charts.

Officially, Willow joined the Roc Nation family, signing to hip-hop legend Jay-Z. Interestingly, when Jay Z heard her voice, little did he know of her age or her parents!

She released her second single on February 3, 2011. Smith performed the song on The Oprah Winfrey Show and their video was released on March 9, 2011.

She collaborated with rapper Nicki Minaj for ‘Fireball’. The song badly bombed at the box office, failing to make it to any type of chart, except the US R&B chart, at number 121.

She announced the release of her debut album ‘Knees and Elbows’ in Aril 2012 but later postponed it to the end of the year. In the meantime, on May 1, 2012, she released her first-ever video ‘Do It Like Me (Rockstar)’.

Willow along with DJ Fabrega, started a duo titled ‘Melodic Chaotic’. ‘Summer Fling’ met with wide criticism for its mature tones and her fake English accent.

She followed it with a surprise release of her debut album ‘ARDIPITHECUS’ on December 11. However, her debut album is based on the scientific name of the first hominid bones found on earth.

Smith claims that she was in a transitional state in her life and most of her songs helped her connect with her ancient self.

She won YoungStars Award on BET Awards, she received an award for Best Performance in a Feature Film – Young Ensemble Cast for Kit Kittredge: An American Girl, 2008, on Young Artist Award, in 2009.

Willow was rumored to be dating actor Moises Arias, in  May 2014. Willow is 6 years younger than Arias.

Willow Smith has black dreadlock hair and brown eyes. Her height 5 feet 7 inches, and weighs 49 kg. Her shoe size is 6 (US).

Also get to know more about Michelle Phillips, Chris Brown, and Drake.