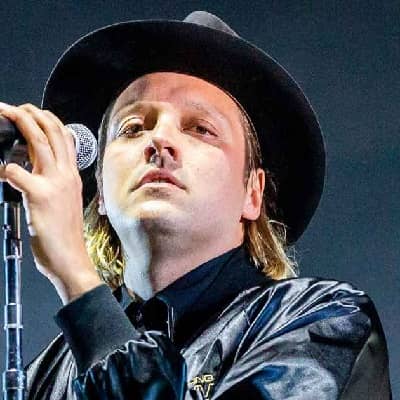 What is the relationship of Win Butler?

Win Butler is married to beautiful Regine Chassagne since August 2003. His beloved is a popular singer-songwriter, musician, and multi-instrumentalist.

The two met while Regine was singing jazz at an art opening at Concordia in 2000 and he persuaded Chassagne to join the band. They dated a few years before getting married. The wedding ceremony was kept private and attended by some close friends and their family members.

They together have a son, Edwin Farnham Butler IV who was born on April 21, 2013.

Who is Win Butler?

Win Butler, better known as co-founder of Montreal-based indie rock Arcade Fire is a singer, songwriter, musician, and multi-instrumentalist. He is popular with his stage name Windows 98 as a disc jockey.

He is the son of father Edwin Farnham Butler II, a geologist for an oil conglomerate, and mother Liza Rey who performed on the family TV show, The King Family Show. His parents currently reside on Mount Desert Island, Maine.

Win grew up in The Woodlands, Texas, and later moved to Buenos Aires, Argentina. He also has a brother named Will Butler who is also a multi-instrumentalist and composer like him.

Butler holds the citizenship of Canada which makes him a citizen of Canada. His zodiac sign is Aries.

In 2005, he contributed to the UNICEF benefit project as part of the North American Hallowe’en Prevention Initiative, performing the song “Do They Know It’s Hallowe’en?” along with his wife Regine Chassagne.

Since he co-founded the band Arcade Fire in 2001, he has established himself as a popular songwriter, musician, and multi-instrumentalist. Better known as Windows 98 in the field of DJ, he has entertained a lot of people.

Some of the songs he has written include Afterlife, Black Mirror, City with n children, Creature Comfort, Keep the Car Running, and Ocean of Noise among others.

Moreover, he is a skilled instrumentalist who plays guitar piano keyboards bass, mandolin, and banjo.

Butler has an estimated net worth of $8 million US. Similarly, he earns around $400k per year, $32k per month, and over 8k per week.

Four women have accused Win of sexual misconduct. According to Butler, all the contact with the accusers was in an agreement between both parties and refuses all allegations of misconduct.

Butler stands at a height of 6 feet 4 inches and weighs moderate. He has irresistible dark brown eyes and blonde hair.

Win might not be a fan of social media platforms. Therefore, he is not available on any social media accounts.

Lily Rose Depp Addresses Nepotism Claims and Reveals the Challenges She Faced Growing up in the Spotlight!