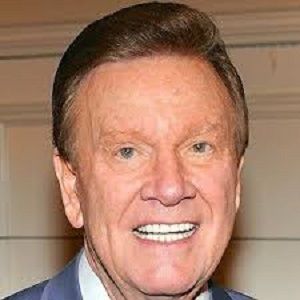 They gave me a job at $25 per week, and for that, you were expected to do everything. You read commercials, the news - play-by-play high school football and basketball, and you played records. If the floor needed sweeping, you did that too

I had been a deejay since I was 17. My roots were in radio, but I thought it would be fun to try my hand hosting a television game. I'd become addicted to Allen Ludden's popular show, 'Password.' And after hosting a local version of 'What's This Song,' a musical show featuring celebrities, NBC added it to its daytime lineup.

Who is Wink Martindale?

Wink was born in Jackson, Tennessee, the United States on December 4, 1933, his mother’s name is Frances Geraldine Martindale but his father’s name is unknown. His birth name is Winston Conrad “Wink” Martindale.  There isn’t any information regarding his siblings. He belongs to American nationality and English ethnicity. His birth sign is Sagittarius.

Talking about his education, he attended the University of Memphis and graduate with a Bachelor of Science degree in 1957. While there, he also became a member of the Kappa Sigma Fraternity.

On talking about his profession, during 1954, he was showing the WHBQ studio to some friends when he realized that his colleague. Whereas, he rendition of the spoken-word song “Deck of Cards” went to no. 7 on the Billboard Hot 100 chart. In addition, his first game-show hosting job was on the show What’s This Song? Then, from 1970 to 1971, he also hosted a similar song-recognition game show, Words, and Music, again on NBC.

During 2006, he received a star on the Hollywood Walk of Fame. Whereas, he has also appeared in various TV commercials, including a stint as a pitchman for the travel website Orbitz.  On June 2, 2009, he also signed with the syndicated Hit Parade Radio format. The format began operation on February 7, 2010, with him as afternoon drive personality. The syndicator stopped operating on June 6, 2010.

During 2008, he also appeared on GSN Live, an interstitial program during the afternoon block of classic game show reruns. Likewise, his last program was the GSN original series Instant Recall, which premiered on March 4, 2010. During 2012, he returned to radio, as host of The 100 Greatest Christmas Hits Of All-Time.

Wink garnered the ACE Awards in 1989. He won Star on the Walk of Fame Awards for Television. There is no information about his salary. His net worth is around  $20 million dollars.

There was a controversy that, he had a long-standing friendly feud with Chuck Woolery and Gene Rayburn. During 1999, he admitted that Rayburn and Woolery were responsible for his potty-humored nicknamed of “Stink Fartindale” and would always fondly remember their times together.

Wink’s hair color is brown and his eye color is grayish blue. However, his height, weight, and shoe sizes etc are unknown.

Also, read the affair, salary, the net worth, controversy, and the bio of Kevin Hunter, Dick Clark, DJ Envy