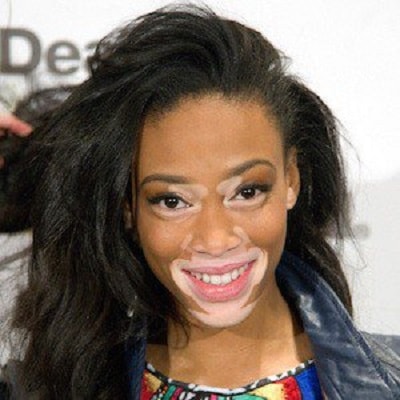 Regardless of what race, what color, what sex, what nationality, what sexual orientation - regardless of who you are, equality should always rule! Whatever is right for you is right. Period.

I have my flaws, but I embrace them and I love them because they're mine.

I liked to hang around my mom's beauty salon, watching her do hair.

What is the relationship of Winnie Harlow?

Winnie Harlow is currently in a relationship. She is dating a basketball player named Kyle Kuzma. They started to see each other from March 2020.

Previous, she has dated singer, rapper, and songwriter Wiz Khalifa. She posted a photo on her Instagram wearing his gold Cam chain. They started their affair in 2018 and ended in 2019.

Who is Winnie Harlow?

Winnie Harlow is a famous Canadian fashion model and public spokesperson. She became famous after she became a contestant on the twenty-first cycle of the US television series, American’s Next Top Model.

She was born on July 27, 1994, in Toronto, Ontario, Canada. Her birth name is Chantelle Brown-Young and she is currently 28 years old.

At the age of four, she was diagnosed with the chronic skin condition vitiligo, characterized by depigmentation of portions of the skin.

Winnie holds Canadian citizenship but her ethnicity is Jamaican.

Due to her chronic skin condition, she faced a lot of hardship at a young age and also often bullied for her unconventional looks and was also called cow zebra by her friends.

She changed schools many times and decided to quit her studies and even thought of committing suicide and end her life.

Unfortunately, she eliminated in the second week of the finals and began modeling for the Spanish clothing brand Desigual and became their official brand representative.

Furthermore, Winnie Harlow modeled for several fashion magazines such as I-D and Dazed and also on a fashion website Showstudio.com. Also, she modeled for an Italian clothing band called Diesel in 20156 for its spring/summer 2015 campaign.

Similarly, she appeared in the cover of ‘Cosmopolitan’, ‘Complex’, ‘Vogue Italia’, ‘Ebony’, and many more. Recently, she modeled at the Victoria’s Secret Fashion Show in 2018.

It seems Winnie has not been awarded and nominated for her work to date.

She has an estimated net worth of around $4 million as of 2022 and she has earned that sum of money from her professional career. Regarding her salary, it is around $200K annually.

There was a rumor regarding the affair of Harlow with Wiz Khalifa and the rumor ended after they officially confirmed their relationship.

Also, there was a rumor that she was in a relationship with the British F1 racer, Lewis Hamilton. However, they never confirmed the rumor.

Winnie Harlow has a tall height of 5 ft. 9 inches and weighs 55 kg. She has dark brown eyes, black hair, and high cheekbones.