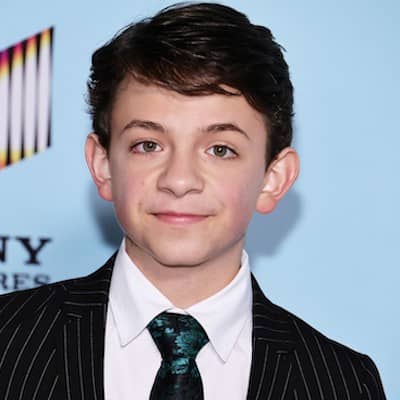 What is the relationship of Winslow Fegley?

Young Winslow Fegley has not revealed his personal life details. He is currently possibly single and data regarding his affair or girlfriend is not yet published.

On digital platforms, his account is managed by his parents, so it’s hard to track his personal life.

Who is Winslow Fegley?

In 2022, he was seen playing a role as Josh Primm in Lyle, Lyle, Crocodile (a musical comedy film) alongside other actors named Javier Bardem, Constance Wu, Scoot McNairy, and Brett Gelman.

Directed by Will Speck/Josh Gordon, this project is about a singing crocodile voiced by Shawn Mendes, who participates in a singing competition show.

This film is doing great as it has an amazing rating of 6.2 on IMDb plus 72% on Rotten Tomatoes.

His full birthdate is 29 Jan 2009 and the place he was born in is Allentown, Pennsylvania, the United States. The name of his father is Michael Fegley (actor) and his mother is Merce Fegley (actress).

Further, Winslow’s ancestry is a mix of Irish-German-Slovak-Italian-Dutch, and has two actor siblings named August Kiss Fegley (sister) plus Oakes Fegley (brother). Oakes did movies like Pete’s Dragon (2016), This Is Where I Leave You (2014), Children of the Moon (2013), etc.

As for his academics, he might be attending classes at a local school.

Winslow Fegley has appeared in a few screen projects but his performances in all of them were much appreciated. In 2018, he did his debut with an episode titled Gender Bender of Teachers as Daniel.

Besides this, Winslow was featured in movies too. He was in Timmy Failure: Mistakes Were Made as Timmy Failure in 2020. Also, his other films When the Moon Was Twice as Big as Elmer’s Son and Spinning Gold as Young Al Bogart are in the post-production stage.

By the sources of 2022, Winslow’s net worth is estimated at $500 thousand. The yearly salary that he charges are under the rug.

He has a total of only 12 screen credits as of this writing.

The star cast of Lyle, Lyle, Crocodile (2022’s film), Winslow is keeping himself away from scandals as well as rumors.

Winslow Fegley has an average height is 4 ft 8 inches and his body weight is 40 kg. Adding some more, he has dark brown hair with light brown-colored eyes.