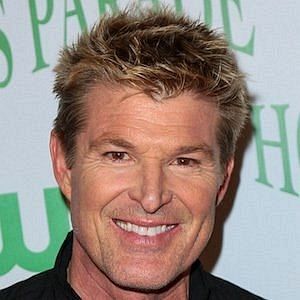 Winsor Harmon is a married man. He is in a relationship with Deanna Lindstrom since 18 July 2001. This couple is blessed with a son Winsor Harmon IV, born on May 10, 2003. He is also the step-father of August (Deanna’s daughter).

At first, Winsor was married to Candice Harmon in 1996, but the marriage didn’t last long so they got separated in 1998. He has a daughter, Jade, from his previous relationship.

Winsor Harmon is an American actor, who came to the limelight from his role in the American soap opera The Bold and the Beautiful.

He was born in Crowley, Louisiana, the United States on November 22, 1963, His birth name is  Winsor Dewey Harmon and he is currently 55 years old. Winsor has not provided information regarding her parents and childhood.

There is no information regarding his siblings. Winsor holds American citizenship but his ethnicity is unknown. His birth sign is Sagittarius.

On talking about his education, Harmon attended Rockwall High School in Rockwall, Texas, and graduated in 1982. Then, he went on to study at Texas A&M University on a football scholarship.

Harmon made his debut from the 1994 TV series All My Children. Later he featured in various movies and TV series and made a strong fandom. Harmon also worked for the Ford Modeling Agency also known as Ford Models. Before starting his career in acting, he worked as a model for the company. Besides acting and modeling, Winsor Harmon became well known for producing the drama movie Cathedral Canyon.

There is no information regarding his income, salary. Whereas, Winsor Harmon’s net worth is estimated to be around $8 million.

There was a rumor that Winsor was been arrested for being drunk in public. This happened in less than three months after he was booked for a similar incident.

Winsor Harmon has a height of 6 feet. Additionally, he weighs is unknown. Winsor’s hair color is blonde and his eye color is light brown.

Also, read the affair, salary, the net worth, controversy, and the bio of Chris Santos, Josh Hartnett, Alex McArthur